Photos for your present enjoyment and their future humilation

My kiddos have been particularly funny the last few days, and I've been documenting it faithfully.  Here we go!
As I alluded to in yesterday's post, Chickie currently has a soap obsession. While I was working in the kitchen yesterday afternoon, Chickie went to the bathroom. Zoodle followed her and sat at the door, watching. They'd been in there awhile, and after repeatedly telling her to come out, I went to check on them. Chickie's hands were soapy, and Zoodle...well, a picture will say it best. 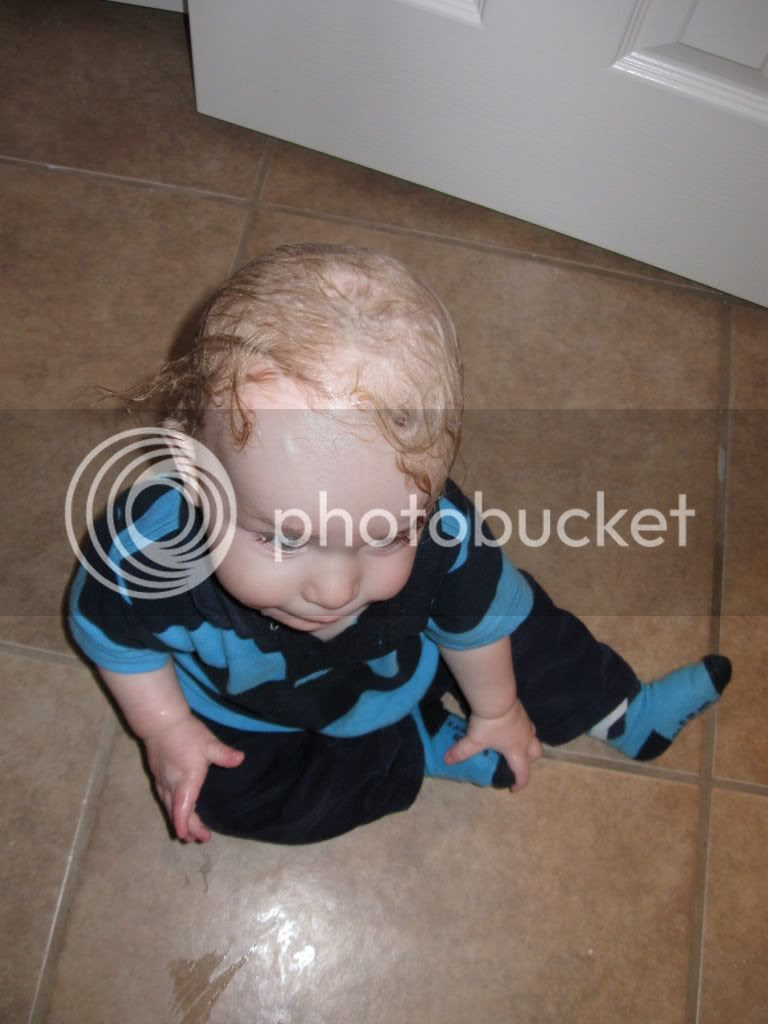 Apparently he didn't mind having his hair washed by his sister. 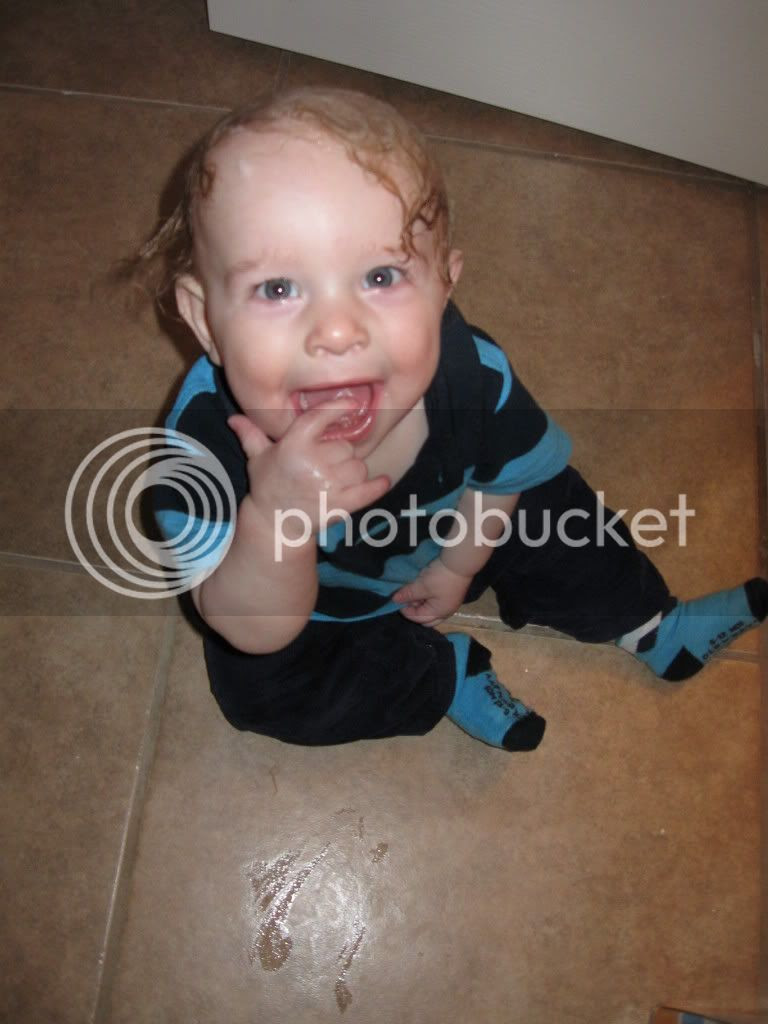 Earlier in the day, Chickie had gone to her high chair, which we also use as a time out chair.  She can climb in it herself, but if the tray is on and she tries to get out, I invariably hear the words, "I'm stuck!" and am greeted by this sight: 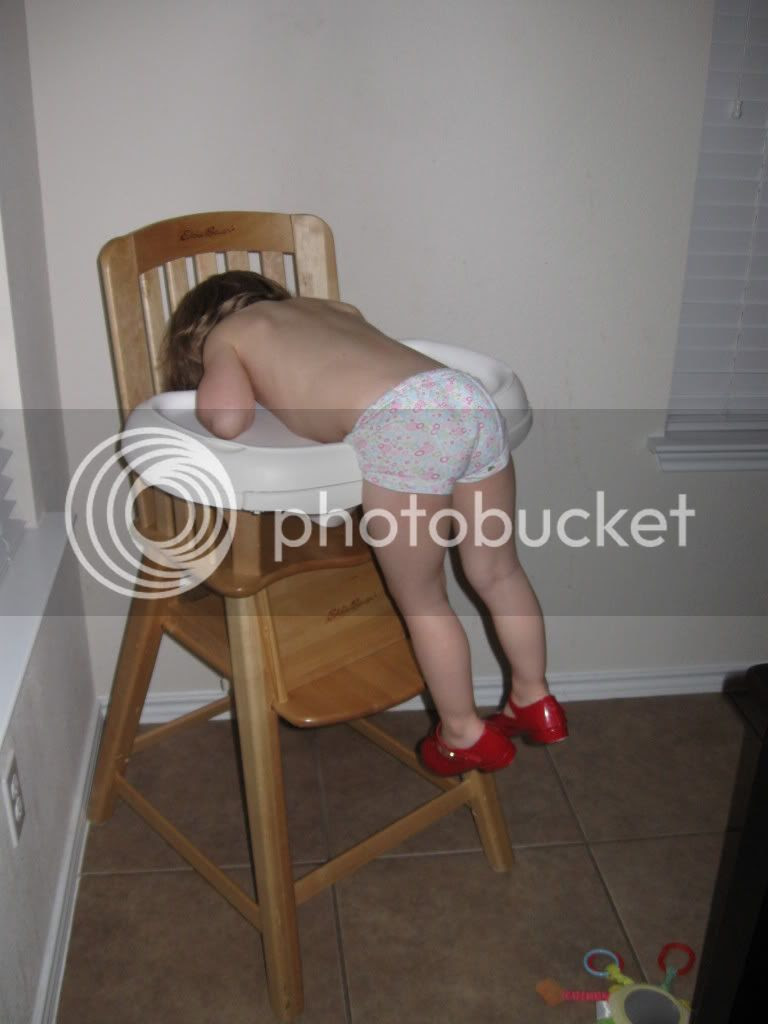 Apparently she trusts that I'll come when asked, since it happens frequently. 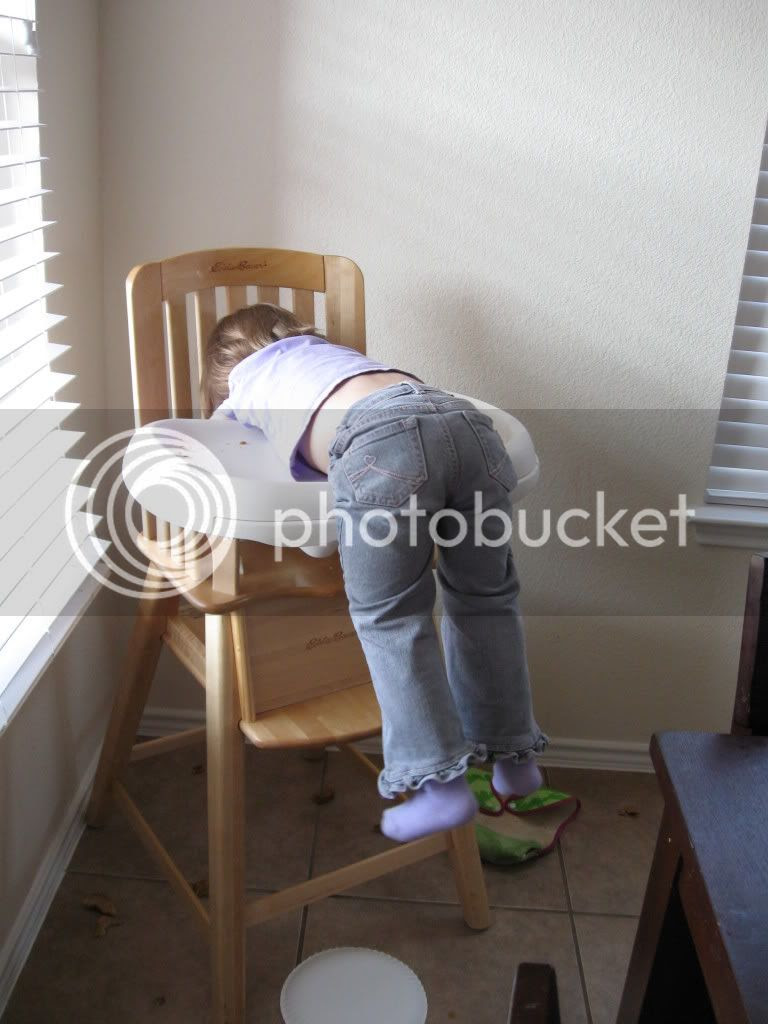 I wanted to take some "When did he become such a big boy?" photos yesterday, and Zoodle saw the camera and "took the stage." 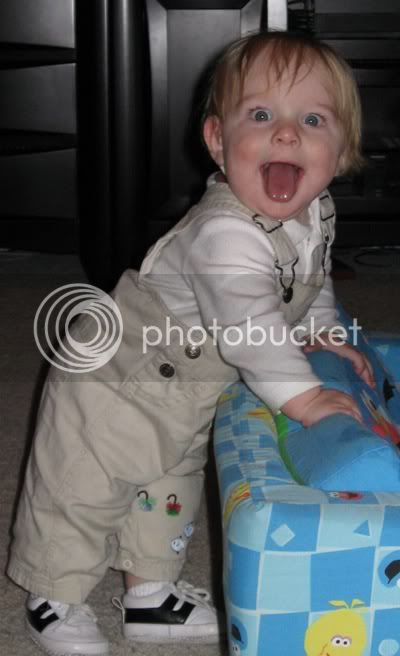 This morning, he concerned me a bit. Look at his pants.  Do you think he's turning into a gangsta baby? 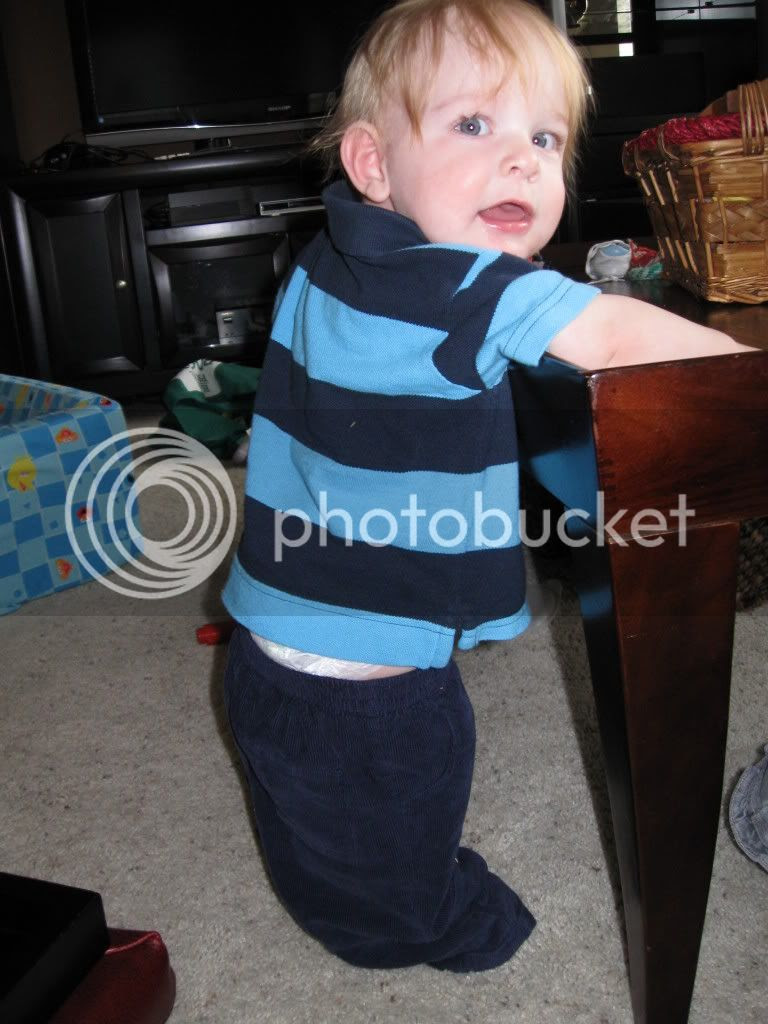 If he's going to be sagging his pants that low, I really should find some snazzier diapers to peek out of the top.
Small children....  Exasperating?  Sometimes.  Hard work?  All the time.  Funny?  Often enough to make me love the job.
Posted at 5:00:00 AM

Great pictures! Gunny does the same thing as far as getting stuck and then asking (actually demanding) help. He likes to follow it up with, "That's gotta hurt!" Gotta love these little monsters!

By the way, I see enough of the gangsta look on the 8th and 9th graders at school to say ... no. Both cheeks must be 100% out of the top of the pants in order for him to be a true O.G.

Those RED shoes and undies! HAHAHAH!!!

Fantastic pics!! I love the Gene Simmons face on Zoodle...

And we have the same jeans as Chickie!!

Extremely funny! I really enjoy photos of your kiddos! Chickie is so funny. She made Zoodle look funny. Very cute! I just LOVE their clothes! So nice. Just my taste I guess. Adorable children as always.

So cute! Your children are adorable! I love Zoodle's expressions!

Your babies are so precious. And the pics are great - I can't comment on just one. The post brought a smile to my face so thank you.

I love A's bright red 'Dorthy' shoes. Russell saw a pair in Target and wanted them but I had to tell him no;-) Your little man is precious... and patient!

LOL, that is priceless. I must say that is exactly why our high chair was banished back to the basement quite some time ago. It was become more jungle gym than anything else!

Worth A Thousand Words said...

Becki--If I was able to hang out with you more often I would be SO much more versed on current popular culture & slang....

Michelle--He is SUCH a ham for the camera!

Call Me Cate--Oh, good--I knew they'd make the grandparents smile; I hoped they would do the same for others!

Hillary--HA! Yeah, the red shoes look cute on Chickie, on Russell maybe not quite so much. :)

Lyndsay--Basement...oh, how I would love a basement. I'm breaking the 10th commandment (coveting) right now.

Worth a Thousand Words--Well, thank you; I'll let Zoodle know you like his sense of style! :)

So cute! So hilarious. Love how you took pictures of the same shots and posted them like that. Oh my gosh. I was dying laughing. LOVED the red shoes with the underpants!

Oh my gosh! Thanks for the chuckles! The pics are adorable. At least Zoodle had "very" clean hair. Hee hee I haven't had the soap experience yet with the kids or the grand kids. oh oh, hope I didn't just jinx myself. Great Post!

I see a conflict in fashion statements here on Chickie -- your basic big girl panties (way to go, Chickie!) paired with her ever-festive red shoes! I think the fashion world would call that eclectic!

As for gangsta' boy, he's going to have to replace that angelic smile with a "I'm a tough guy" scowl if he wants to fit into THAT world! :)

LOL! I LOVE the hair washing! that is just awesome that he let her do that!!!!! also love the highchair and the panties and red shoes! great post!

LOL! Now that Zoodle is getting older & more mobile, I'm sure that will just be the first of many "situations" the two of them will be involved in together. At least this time he was an innocent victim. Before you know it, you'll walk into the living room and think it snowed in the house, before you realize that it's Kleenex all over the floor and your two kids are giggling over the almost-empty Kleenex box as they take turns ripping a tissue out of the box and flinging it on the floor. Not that I've ever had anything like that happen. Especially not just yesterday. =)

but I have come back at least a couple times to see Chickie stuck on her high chair. That is priceless, it makes me laugh everytime :) She is gonna LOVE that when she's older. Especially the undies and red shoes. A good one to show to first dates :)

Oh these are tooooo funny! I think my favorite is the red shoes with underwear stuck on the time out chair! That will be fun to pull out on her first date!

And to be efficient, I am thrilled to find a recipe for Indian Fry Bread. I'm sure I'll gain about 10 pounds using it!

Beth-YOu are hilarious! Those pictures are priceless. I never took nearly enough, and never did anything with the ones I did. Not only do you have great blackmail photos for the one true parent job description - embarrassing your children -- but you have given them precious memories with this blog! Find a way to save all these posts as it will be an exceptional remembrance in years to come!
Erin

Beth- Those pics of Chickie hanging from her high chair made me laugh out loud! I've got one of Viv when she was cruising- she'd tumbled head-first into her toy bin, little legs were flailing in the air!

I better stop reading, because I can't breath from this laughing!!! Awesome pictures. Lovely sense of humour!!!