I recently got a special order for a crocheted fox scarf. This definitely turned into one of the most fun pieces I've designed! Here it is, the Foxy Lady Scarf:

This little toggle clasp slips between crochet stitches to attach the head to the body or tail of the fox (as it's being worn in the first photo.)

Christmas will be here before we know it. It's a great time to get in your orders for hats, scarves, handbags, or other items! Click on the "Crochet Examples" tag at the bottom of this post to see more, and email me at cbethcrochet@gmail.com with your ideas. I love doing custom designs!
Posted at 8:43:00 AM 11 comments:

A few months back, Chickie and her friend Coqui kissed each other at church--a couple of times. Big ol' smooches on the lips. We adults couldn't help but laugh, but we also made it clear to them that kissing is really for when they get older--at this age, hugs are more appropriate! They took our words to heart, and now they give each other frequent, enthusiastic hugs.

Today on the way home, Chickie told me about one of the boys in her class who had hugged her and kissed her, when she didn't want him to. I asked her how it made her feel. "Icky" was the word she used to describe it, and that was a red flag to me. This was no consensual kissing--or hugging!

"What did you do about it?" I asked her. She responded that she told her teacher. Yay!! She did exactly what I want her to do in these situations--told her teacher immediately, and told me too. Her teacher used their discipline system to give the boy a consequence.

Now, I know that exploring appropriate forms of affection is totally normal at age five. But I also think it's never too early for my daughter to learn that she should have boundaries, and that she has permission to enforce them.

So I told her she can push a boy away if he's trying to hug or kiss her and she doesn't want it. "I can push him?" she asked, surprised. I made it clear that if she can get away without pushing him (just walking away as he approaches), she should. But if anyone (except a younger kid who doesn't know better) tries to touch her in a way that makes her feel icky and she can't just walk away, she can push.

I've got to be partners with her teacher if I want this year to be a good one. So far, it has been--this is the only real concern I've had to bring up with her teacher. She responded quickly to my email. She told me that they suggest the child say "Stop" and then tell the teacher. They can't advocate pushing, but if someone is holding onto them and they can't get away, of course they can do what they must to get out of the situation. Sounds like a good plan to me, and one that I'll be reinforcing in later conversations with Chickie.

What about you? Do you remember dealing with these issues when you were a kid? Or have you dealt with them with your own children?
Posted at 3:38:00 PM 7 comments:

I've got big stuff on my mind right now and I've been wanting to find joy in the exact circumstance I'm in, every day.

As I was walking home the other day after dropping off Chickie at school, I was worrying about this big stuff that's on my mind. I was fighting in myself to trust God instead of indulging in worries.

Then I started really paying attention to Zoodle, who was riding in the stroller. He was playing a silly game on my phone in which he says something into the phone, and a cat repeats what he said in an altered voice. He was giggling in delight as he made funny noises and heard them repeated. So I took the phone and started saying my own little messages.

We both laughed, and I realized--finding joy doesn't just apply to the big stuff in my life, the stuff that consumes my attention. Lots of times that big stuff doesn't really need that much attention.

Next time my mind is warring between worry and joy as I look at all of life's unknowns, I hope I can turn my attention to a giggling kid or a great song or a sweet moment with my husband--all the simple things God gives me to experience joyfully...every day. 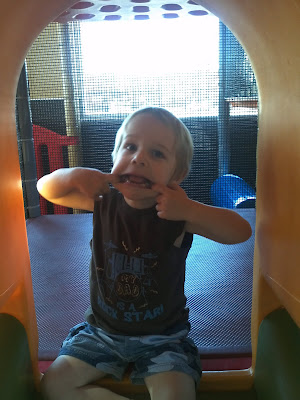 Yesterday Dennis passed away after a hard-fought battle with cancer. I want to share some of my memories of him.
I'm going to miss my friend Dennis.
Posted at 9:20:00 PM 5 comments:

We sat around the dinner table the other day with some friends. With four adults and four kids, there was a lot going on, and Zoodle definitely hasn't fully grasped the quiet, "inside voice" concept yet. His voice rose above the rest.

"Zoodle!" The Engineer said, exasperated. "Why are you talking so loud? You need to learn some volume control!"

We went on with dinner, and a minute or two later, Zoodle's voice piped up,

We all laughed, and Daddy and I explained the "volume control" concept to him. But that wasn't enough. He followed up our explanations with questions about what "vawyoom" means, and what "contwoah" means.

And when we were done, he proved to us that he does indeed have volume control. The control just happens to be stuck on "LOUD."
Posted at 5:00:00 AM 2 comments:

Email ThisBlogThis!Share to TwitterShare to FacebookShare to Pinterest
Labels: Zoodle

I finished my third crocheted handbag! This one is a (very belated) birthday gift for my best friend Ann.

She wanted a flower in the front...

And, once again, I put plenty of pockets inside! (Love the green fabric she chose!)

And, as the weather gets cooler...I'm taking hat orders! Feel free to email me at cbethcrochet@gmail.com
Posted at 8:34:00 AM 4 comments: