So, I think it's high time to share a picture of those pinchable, kissable rolls! 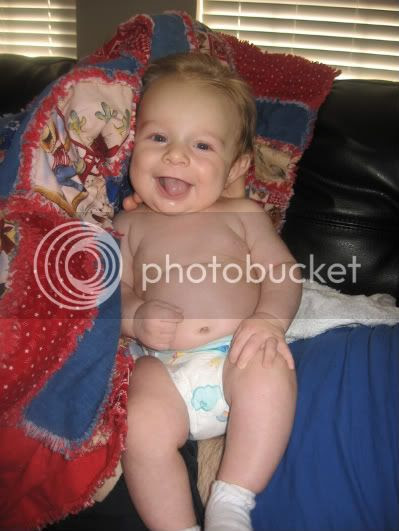 Daddy says Zoodle's "developed" enough that he needs a bra. Well, you THOUGHT they sold everything imaginable online, but apparently infant bras are still an untapped market. The URL www.victoriassecretbaby.com is still available...just in case you're interested in a new venture. And you know those Victoria's Secret scented lotions? The baby version could be infant cellulite cream (in popular scents such as creamed peas, smooshed banana, and breast milk). Good ideas like these don't often come along, folks.

On an unrelated note, we're still dealing with illness here (and it's getting old). Zoodle woke up with a fever and it stuck around most of the day, but is thankfully gone now--probably the same random fever virus Chickie had last week. Now Daddy's got it. Mommy is still healthy and plans to keep it that way!
Posted at 7:48:00 PM

Email ThisBlogThis!Share to TwitterShare to FacebookShare to Pinterest
Labels: pictures, The Engineer, Zoodle

BTW - love the pix on the right. Esp the one of you. You are so freaking adorable it makes me want to puke.

I love the roly-poly baby thighs!

Um, Eli's SO on my Top 10 Cutest Babies list! He's SO adorable. His hair is the best! His smile just melts me!! *lilting sigh*

Beth- email me. I have mojo, need your address! 1charmedgirl@gmail.com