For the last 29+ months, since January 14, 2006, there have been only two days I haven't nursed Chickie. Those two days have both been within the last couple of weeks, since I've been gradually weaning her.

A few minutes ago I finished nursing her for the very last time. While I've really been wanting to wean and have been looking forward to it, after almost two and a half years of daily nursing, it's also sad to see her hit this "big girl" milestone.

I'd found myself really getting tired of nursing two kids, so over the last few weeks we'd gone gradually from three, to two, to one nursing session a day. She's handled it so well--asking to nurse but taking it well when I say no--that it went faster than I expected. For several days we've been talking about how she was going to get a special prize, a book she's been wanting, when she was done drinking Mommy Milk. Today after nursing she let me know she wanted the book and wanted to be done with the milk. After confirming that today was really the day she'd chosen (since I was planning to wait until later in the week), I gave her the book and started trying to adjust to the idea that my little girl is weaned.

Here she is, my big girl, reading Llama Llama Red Pajama by Anna Dewdney (a fabulous children's book, by the way!) 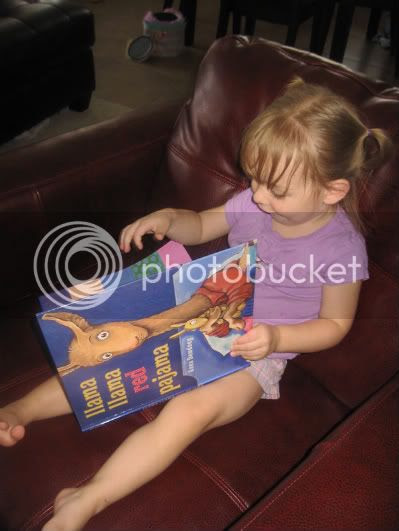 And another way she's growing up (this one entirely sweet and not at all bitter!) is that she's getting better at using the potty. She's still not nearly pottytrained but she is doing better. Very exciting! Here she is reading at the potty (which has ended up being key to this process; she loves to sit there for long periods of time reading!) 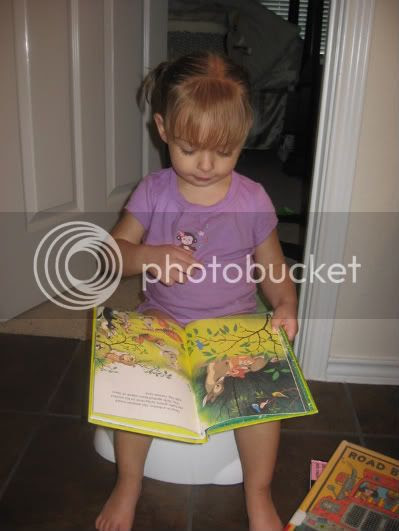 Congrats Ana
such a big girl!
now if she could just rub off on Christopher a little! LOL

Beth- we have that purple shirt too- so cute- I saw the monkey and knew Reese had to have it!

Yay for Ana being a big girl!

Of course you're on my blog roll! I read you everyday. I need to add more to it. Time to dig up that blog roll call thread and click through it again.

Miss Ana, Grammy is so proud of you - becoming such a big girl. I ordered Llama Llama last week also! I'll have to decide what I want to give up in order to really own it! Hope you have lots of happy times on your potty reading Llama Llama! --Grammy

Weaning *is* such a bittersweet thing - Sammy weaned (with a little gentle encouragement) when I was pregnant with Natalie, and although I was ready to be done, I was also very sad about it at the same time.

But hooray for progress in potty-training!