Toddlers are so interesting--they talk (and talk back); have distinct personalities; and exert their independence.  So I think I've been blogging quite a bit about my interesting toddler Chickie lately.  But babies deserve bloggy love too!  I think it's high time for a Zoodle update.
At Zoodle's nine-month appointment this week he weighed in at 19 pounds 10 ounces.  He may not be big compared to the average nine-month-old, but he seems big to me, since Chickie was smaller than that at 12 months!
Zoodle sure is active.  His doctor was really surprised at his high energy--which makes life adventurous and makes doctor examinations difficult! Picture trying to hold a flopping fish out of water and you'll have an idea of how hard it can be to change his diaper.
Zoodle seems to have inherited his daddy's athleticism, if his motor skills are any indication. He's been pulling up to furniture for several weeks, and is a master "cruiser," walking along the furniture and quite easily transferring from, say, the coffee table to the couch. He spends a good part of the day like this: 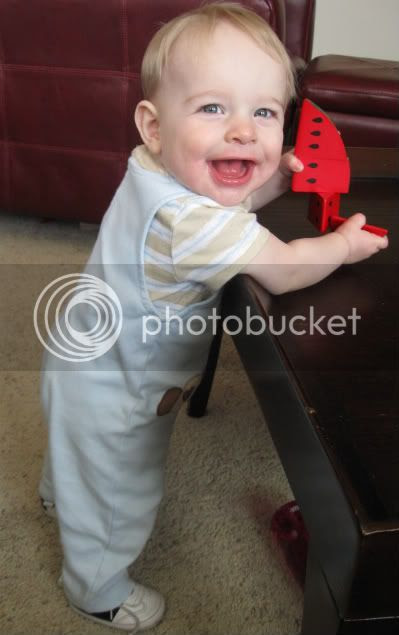 And, yes, the big smile in so many of his pictures is typical.  He is a generally happy guy.  But he definitely has plenty of fussy times too. 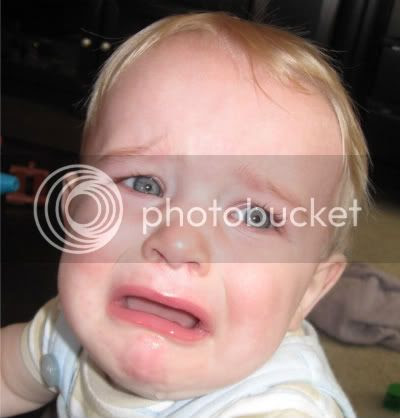 Now, isn't that a cute sad face? Unfortunately, after just a few more minutes of crying, his face gets bright red and blotchy, which is distinctly un-cute. He inherited that unenviable trait from Yours Truly. 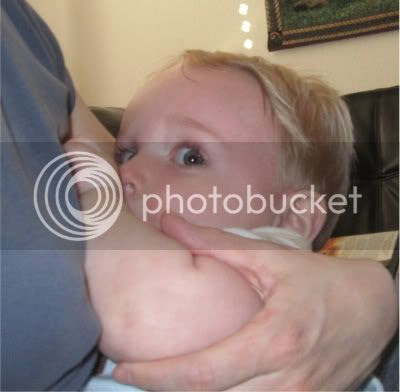 At over nine months, Zoodle has now lived outside the womb for longer than he lived inside. And our family just wouldn't be complete without him.
Posted at 5:00:00 AM

What a gorgeous baby boy! I love his big smile. He looks like a bit of both of you guys (which I guess is as expected).

Ahh, lovely! And if he's standing up and walking (even using the furniture), that makes him a toddler in my book :)

One of my favorite babies in the world! I LOVE the new pictures here in your blog. A beautiful family.

Zoodle surely looks athletic and active. The extreme emotions are very cute especially when he's smiling intensely. And yes I can picture the flopping fish. hehehe! The freezer food is funny. I'm sure he enjoys it. He's just so adorable. I won't be complete without him, as well. He makes me smile.

OMG! I can't believe how big he is already! It's amazing! Good Job Mommy!

That's my stud muffin for you!

Yay a Zoodle update! He's such a little go-getter. He's also the kind of baby that makes me want to have a baby. And not just so I can dream up some ridiculously adorable nickname to use in my blog.

Perhaps so many of our children are now blogged that it will become the norm... Neverthless, I have to wonder if he'll forgive you for the second photo in years to come???

(Word verification was metype - how cute was that?)

I love his smile, but the word zoodle alone cracks me up!

What an adorable little guy!! (& he has officially outgrown Peaceful).

Gosh, he is getting so big and cuter by the day. Watch out though, my youngest has been the most active and he is a total handful now. My MIL swears I'm raising my dh as a toddler.

A.--Thank you! Yes, he definitely favors both Mommy & Daddy.

Rachel--Aaargh, No, I'm not the mother of TWO toddlers! That might overwhelm me! ;)

Call Me Cate--Ha!! The name comes from a song called "Silly Lullaby" by Sandra Boynton. It starts out, "Go to sleep, my zoodle, my fibbilty fitzy foo." (Not sure if I got all that spelling correct!) :-D

Scriptor Senex--Oh, methinks (and metypes) there are a large number of photos he may not forgive me for! :)

Monica--Yes, I love the "Zoodle" nickname--see my comment above for an explanation of it.

Faith--So Peaceful is more petite, is she? Chickie was over a pound and a half smaller than this at 9 months.

Sandi--Yeah, he's got a GREAT personality but he may wear me out, just keeping up with him!

Such a gorgeous boy! It reminds me of the same pictures I took of my own baby boy...10 years ago! My baby will be 11 in March. Cherish every moment!
Enjoy the day!
Erin