I talked to Mamma and Papa this morning. I asked them both how she has put up with him this long. Mamma graciously said he's put up with her too! She also said that Papa learned really early on he wouldn't be able to change her even though there are a lot of things he'd probably want to change...hmm, that might be a good one for me to learn too.

They have 3 kids, 10 grandkids, and a slew of great-grandkids. (I've lost count.) The oldest great-grandchild is 20, so in the next few years they may be able to add great-great grandparents to their impressive list of titles.

Papa served in the Navy after World War II. He worked for the US Post Office until his retirement. He has incredible skills as a woodworker and I'm thrilled to have some of his pieces, such as Chickie's little rocking chair.

Mamma stayed at home with her kids, crafting gorgeous clothes for them without patterns, and working as an Avon Representative. (She's been doing that over 45 years now--yep, still going strong.)

On their wedding day they went to a drive-in (the food kind, not the movie kind), and while it's changed names, the place still exists. So they'll head out there today, sixty years later, to celebrate. A burger and fries never sounded so romantic. 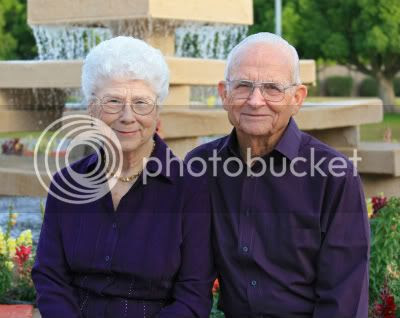 Email ThisBlogThis!Share to TwitterShare to FacebookShare to Pinterest
Labels: Oldies But Goodies

Wow, what a great story. It is great to see people staying together this long in this day and age. They look happy, God bless them!

Beth?? Beth?? Where art thou, O Beth? Come back soon. Thy minions are waitin'.

Ha, Momza! Still here, reading comments...just not responding. Will be home tomorrow evening and back to normal responses and posts on Thursday! :-D

Beth -- What a wonderful story. They not only look happy, but very healthy. A great role model for other marriages.

They are just so adorable in their matchy outfits!