Well, Flame, Chickie's homemade bean-filled teddy bear, had surgery today.
In fact, he's had a lot of surgery in his short life.  He was the first bear I made, so I paid the "dumb tax" on him--I learned what does and doesn't work!  I really didn't choose a good fabric.  It is a thin fabric with a loose weave, which means it isn't great for holding heavy beans.  (When I later used it for a bear for my niece, I doubled it and used a zig-zag stitch for the seams, which worked well.)
Within a day or two, some of Flame's seams were coming undone, the ones I'd trimmed too closely.  So I reinforced the edge seams.
Later I had to hand-sew the center seam from the neck through the bottom of the belly, since it was coming undone.
His bottom also got a little rip, which I mended, making him look like has a little well-placed "crack".
And recently, he got a little hole in his left leg, a hole I knew would soon be big enough to start "spilling the beans."  (And what use is a childhood teddy bear friend if he can't keep your secrets?)
So I decided poor Flame would really look adorable with a patch--probably the first of a few.  Patches add character to teddy bears!  I chose a green felt that won't unravel. Chickie agreed to take her nap without Flame, and when she was asleep, I got to work. 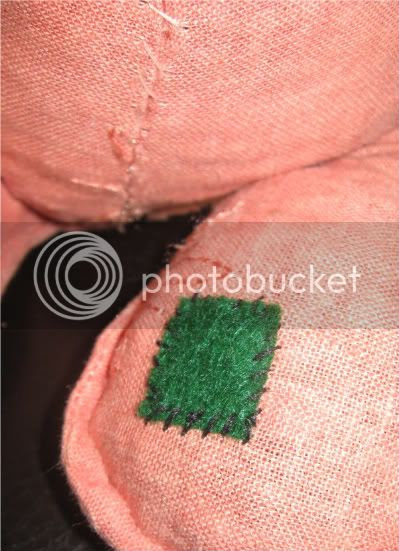 Flame has always been very brave for his surgeries, keeping a smile on his face before, during, and after. 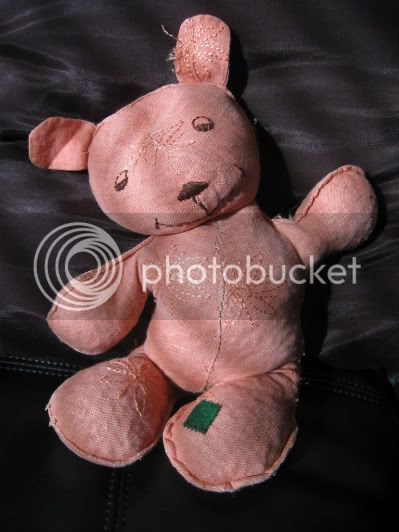 When Chickie got up, she said he "got a Band-Aid!"  I'm glad she likes the result of Flame's bearable surgery as much as I do.
(If you want to know how to make your own bear, check out this post.)
Posted at 2:58:00 PM

That bear is gorgeous, and he looks to be a great sport in surgery.
He makes me want to make one too.

His patch makes him look so loved, which obviously he is if you have to keep stitching him back together.

it put a happy-patch on ME.

If only I could study teddy bear surgery in med school! :P

Oh Lord, that is cute!

I tried to make a homemade book for my son (when I got a sewing machine with the grandiose ideas of making all his clothes) and it was such a disaster. It looked like a monkey made it. And it literally took me an hour to figure out how to thread the machine. And after that experience, I pretty much never sewed again. Thank goodness my husband saw this coming (I'm a total enthusiastic starter and then abrupt quitter when things get hard) and only let me get a very very cheap sewing machine.

Flame is adorable. He will probably end up being like the Velveteen Rabbit -- he looks very very loved!

I'm sorut nothing beats the sewn butt-crack, LOL. Poor Flame, glad he was a tough sport!

The patch looks great! How adorable. Will you make me one too? ;) I love the decorative stitching on flame. You're a good mom!

Adorable. I remember making Bryony a dinosaur (and presumably one for Helen as well since things had to be done one for each in those days). The first one I did - the one on which I paid the 'dumb tax' - was not good enough so I kept it for myself. Wonder what happened to it?

A Woman Of No Importance said...

Such a beautiful pink bear which can only grow in character as he continues to experience life's bumps, bruises and boo-boos!

A.--You should make one; they are quite easy!

Call Me Cate--He is definitely a loved bear!

bARE-eYED sUN--Aww, I'm glad it put a happy patch on you!

Mike Fan--Well, I've already done a second patch, and there will be more to come--if you'd like to do your residency here, feel free. ;)

Jenners--Ha!!! Sewing does definitely take lots of practice--I'm still not great at it.

Omah's HH--Maybe someday I'll do another bear giveaway! The orange stitched flowers are actually part of the fabric; I didn't stitch those. Thank you!

Scriptor Synex--Aww, that's so cool that you made dinosaurs! Chickie would love that.

A Woman of No Importance--I agree! Life's bumps and bruises give us character too, don't they?