Did Noah have a sweet tooth?

I hope so, and I hope he would have liked the cake I made this week. My mom called me a few weeks ago to let me know she was hosting a baby shower during our visit and to ask if I'd like to make the cake. It ended up being a great vacation project (especially since my mom could watch the kids while I worked on it!)

I made a two-layer, 9" x 13" cake with boxed yellow cake mix. I frosted it with homemade blue buttercream frosting. 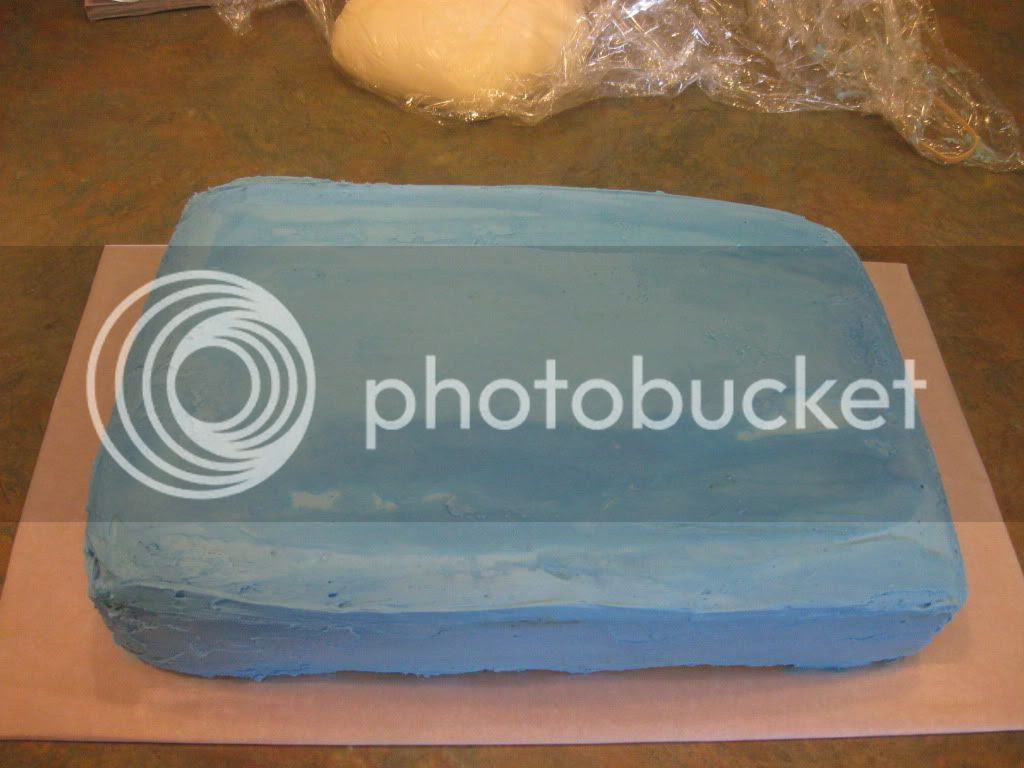 I also made marshmallow fondant. I'd never made my own fondant before, but it was easy, and it tasted better than store-bought fondant! (See below for recipe.) I started rolling the fondant and cutting/molding shapes to put on the cake. 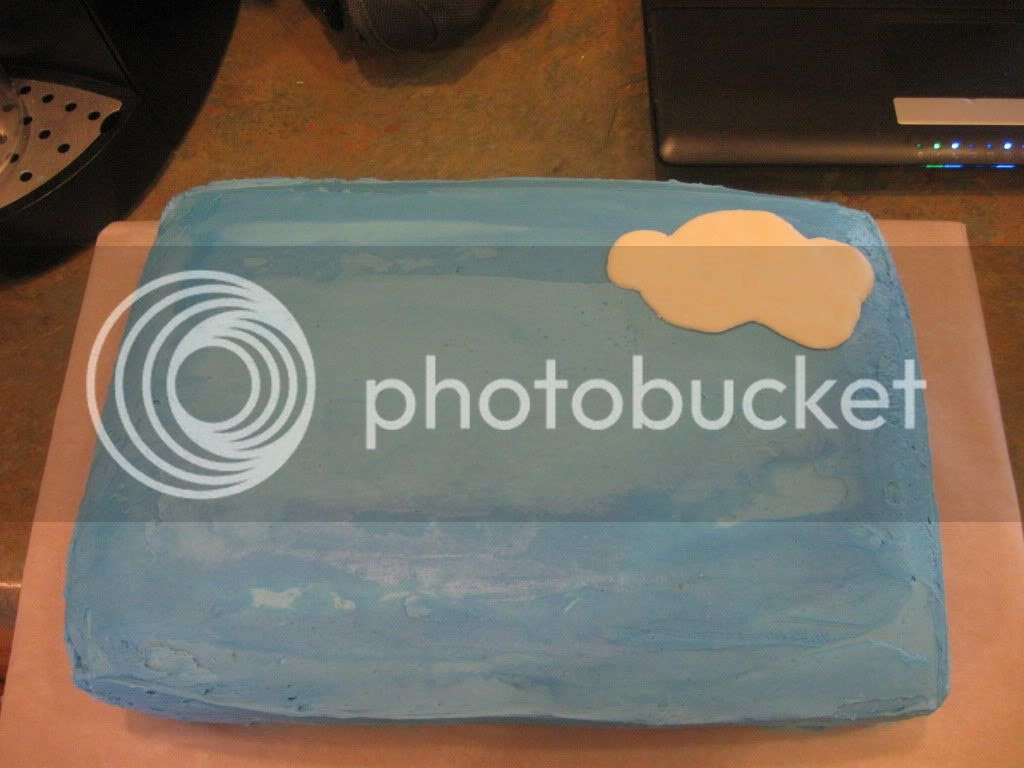 Then I got busy with the decorating and didn't pick up the camera again until the cake was done. 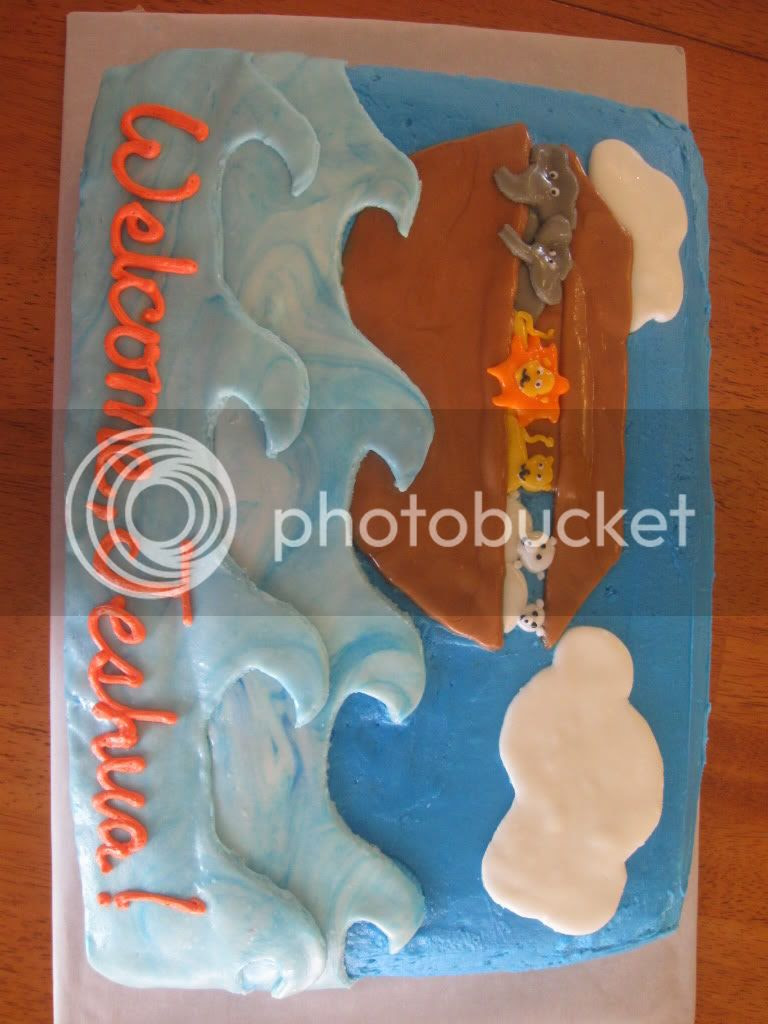 This is the most detailed cake decoration I've done, and it was so rewarding to see the results! 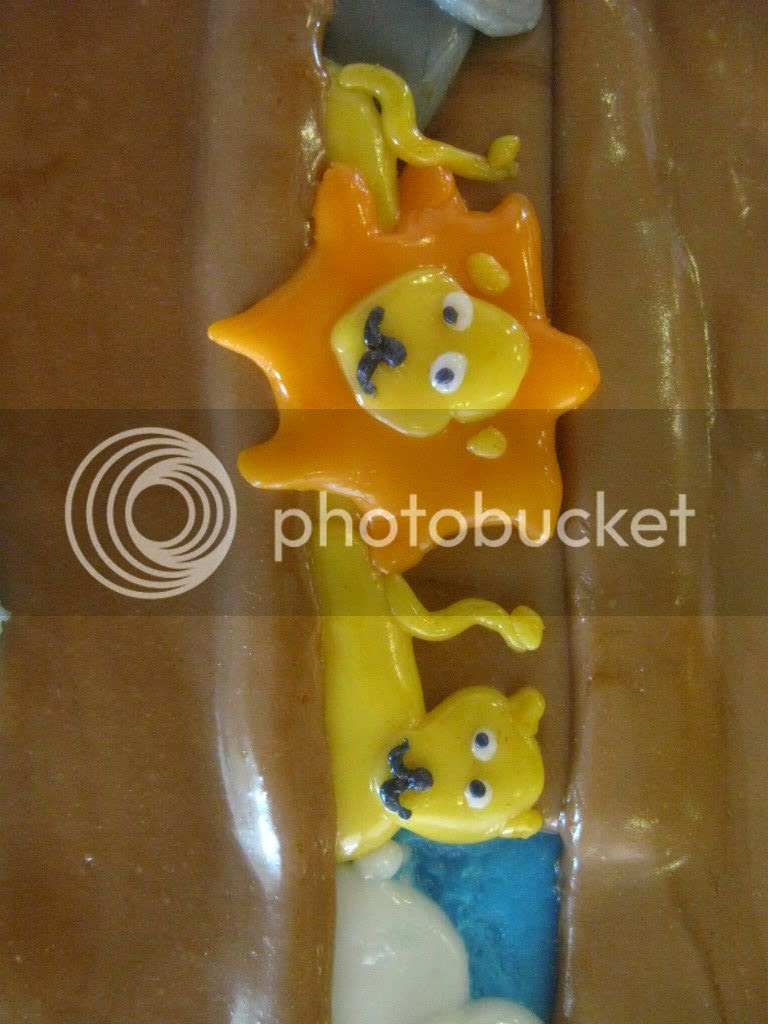 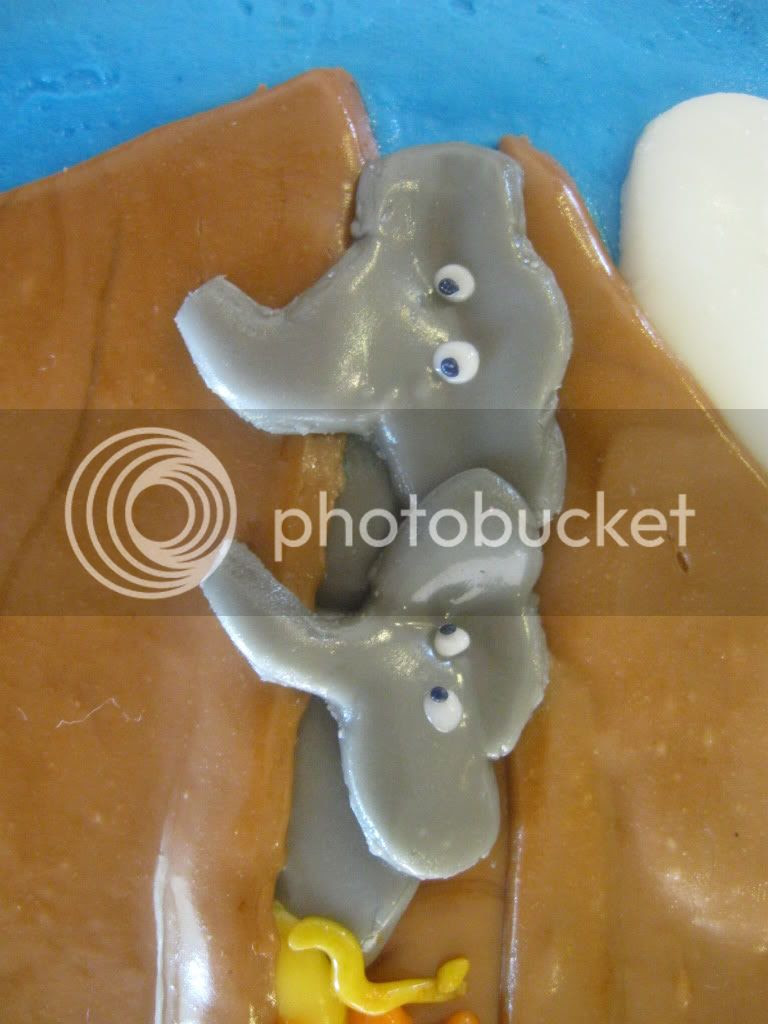 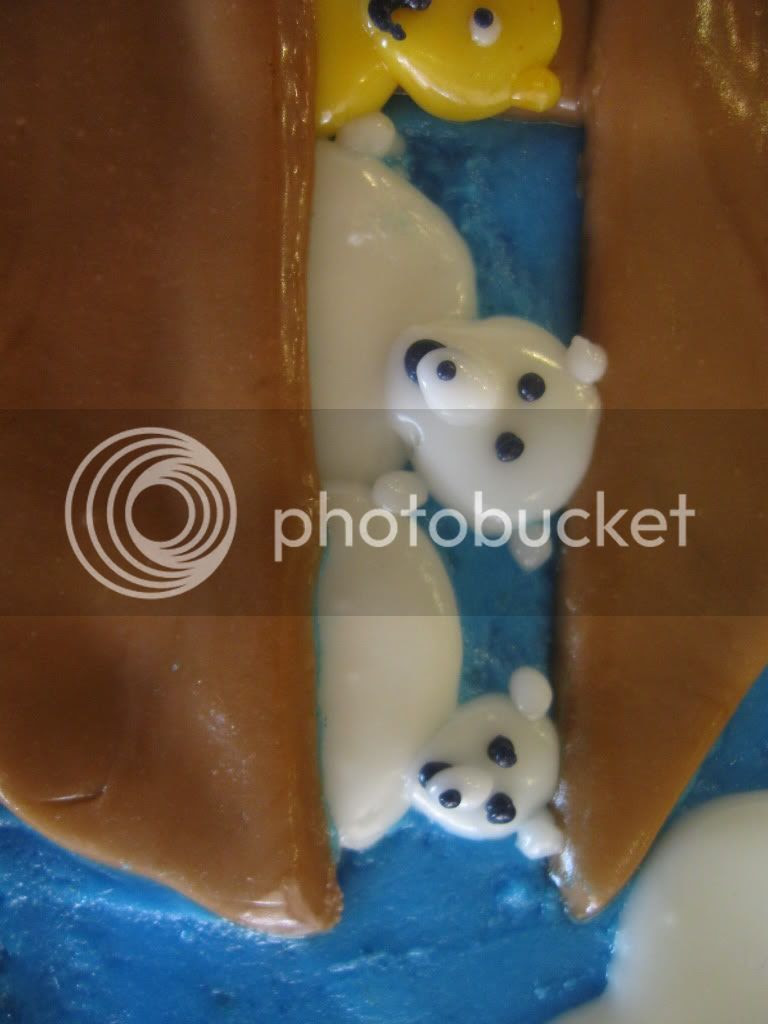 To give the wood a "grain" and make the waves more "watery," I under-mixed the coloring. As I kneaded in the coloring, I repeatedly folded the fondant so that little lines of coloring would change direction and be nice and wavy. 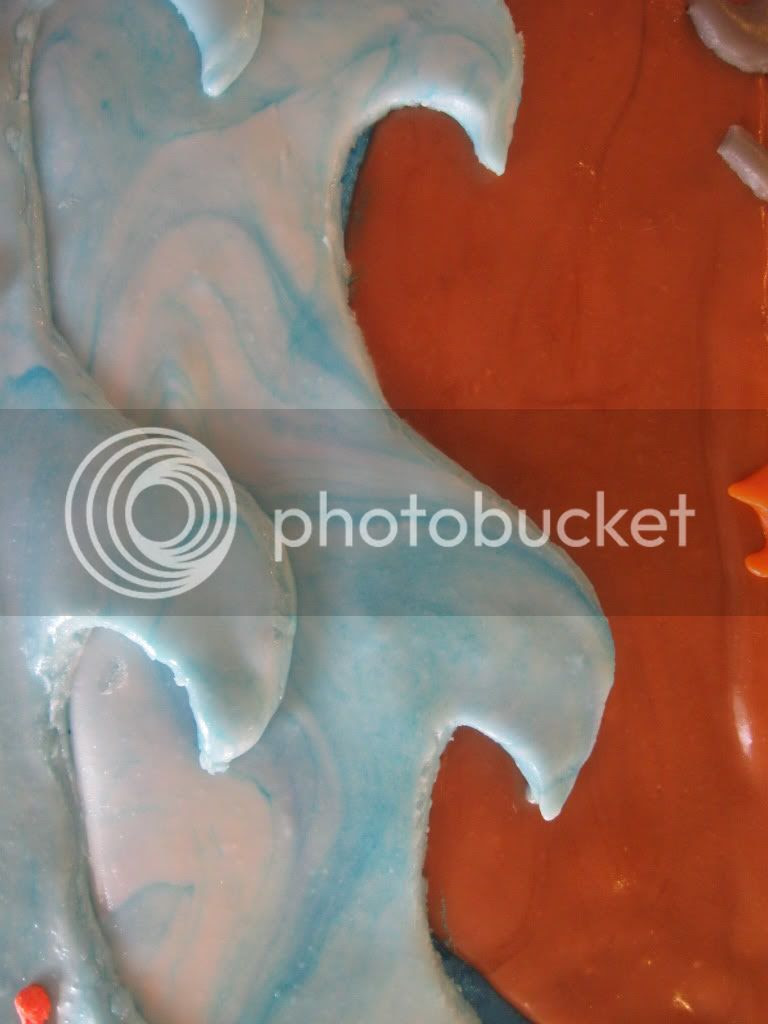 The mother-to-be, S, loved the cake!

At the shower on Monday, S told my mom that her sister had just had a baby that day. Her sister was due four days before S, so S was convinced she'd go into labor on Friday, even though her due date isn't until the beginning of September. My mom later told me this, and I sighed with my wisdom-of-a-mother-of-two. "I hate to see people get their hopes up like that," I said. "Especially sine her first baby was late."

Well, as I wrote this blog post...on Friday...we found out that S is in labor at the hospital! I guess she wished hard enough to make it happen (though that wishing didn't work for me when I was pregnant!)

To make the fondant I used this recipe from All Recipes, but I modified it based on user reviews and my own preference. The result was easy to make and yummy. Here is my version:

2. Put marshmallow creme in mixing bowl. If the fondant will all be one color, you can add coloring now. Add vanilla.

3. Gradually add about 7 cups of confectioner's sugar, mixing well into a stiff dough.

4. Rub hands with shortening, and form dough into a big ball.

5. Sprinkle a clean surface (a silicon baking mat or rolling mat works great) with powdered sugar, and knead well, using extra powdered sugar as necessary, until fondant is smooth and not sticky.

6. Fondant can be used immediately, or wrapped tightly in plastic wrap and used later. Store either at room temperature, or store in refrigerator and let come to room temperature before using. To make different colors, knead in icing coloring (I use the little Wilton tubs). When rolling out the fondant and molding it, you can either use shortening (very easy to work with, gives the fondant a shiny appearance, good for darker colors) or use powdered sugar (gives fondant a matte finish, but can leave white spots on darker colors.) 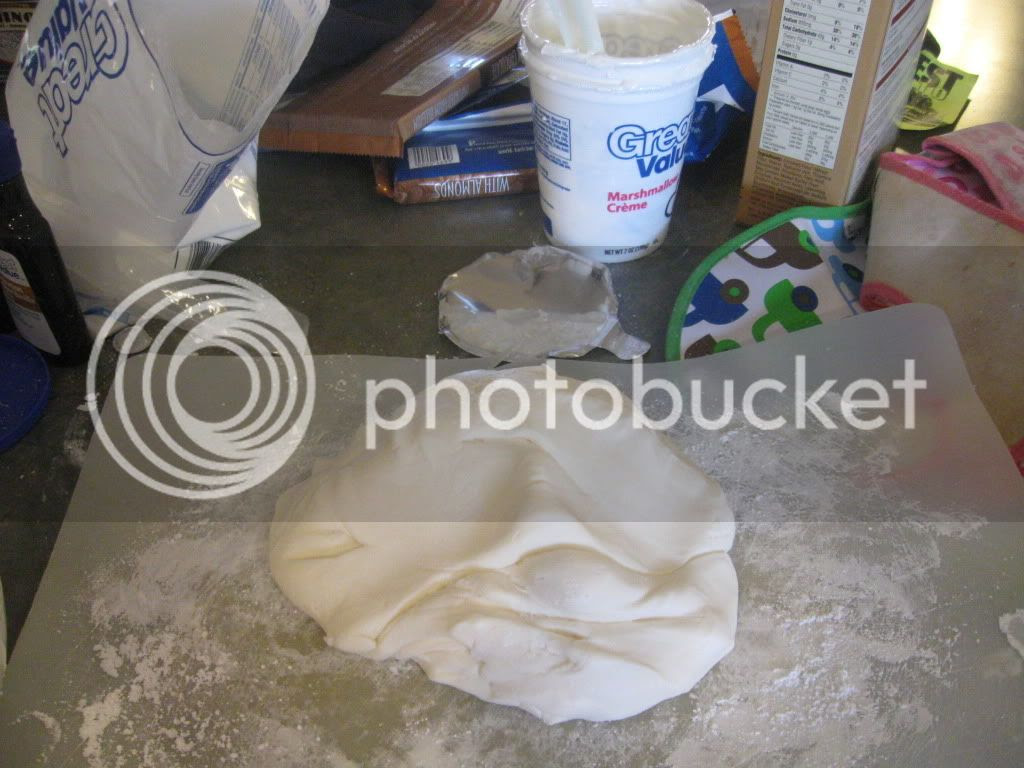 Leftover fondant makes a yummy play dough for kids! (Yes, that is fondant on Zoodle's forehead.) 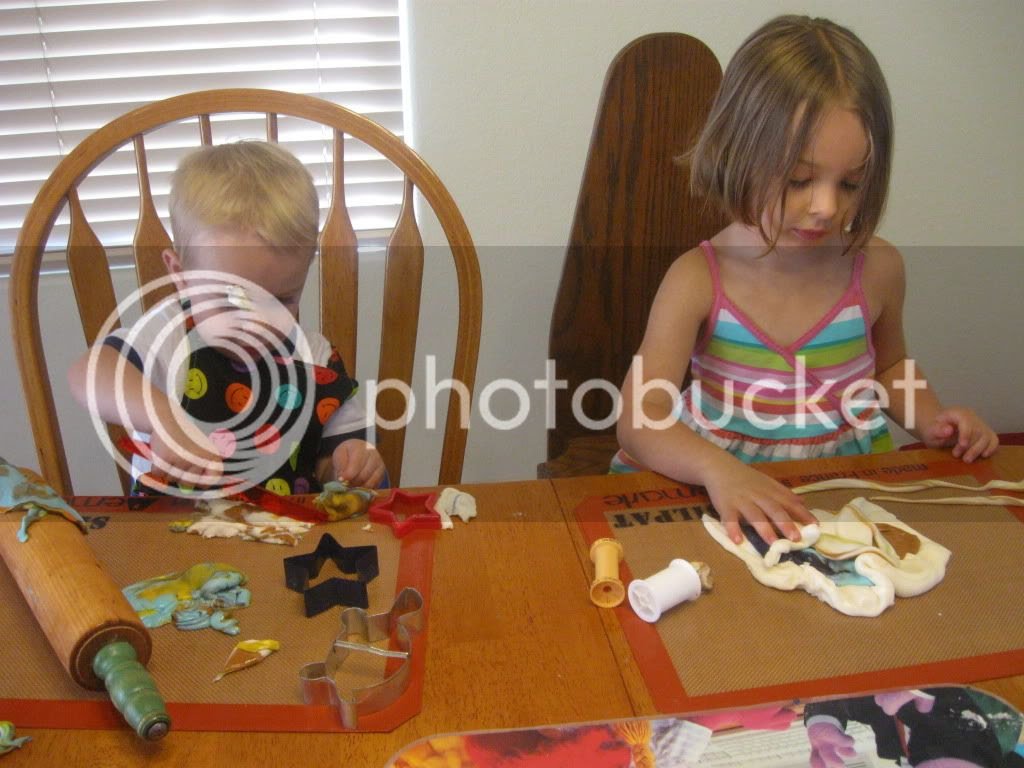 That is an amazing cake! Were the animals in the ark also made with the fondant?

What a great job! I'm impressed at your modeling skills!

ADORABLE! And I loooove the idea of marshmallow fondant! Especially as a fun thing for kids to play with!

I am so impressed! The cake is absolutely adorable! You make this all look so do-able... I'm getting ideas for Abby's birthday in January... :-)

Bobbi--Yes, the animals are fondant.

This is amazing. You put so much detail into it. The animals are each unique and special.

What a great cake, Beth! I can just imagine how everyone at the shower must have enjoyed it. You are one creative young lady. Of course, you come by that naturally, being the child of the Queen of Quilts!

And I'm copying the recipe for fondant. I may have to try some of that.