For a couple of months I've been using Google's free web browser, Chrome.  Before that I'd been a die hard Firefox fan, but Firefox started crashing on me frequently (as in, more often than Internet Explorer), so I tried out Chrome.
And I like it.  You should try it.  Even the name is cool.  Chrome.
It's got several nifty features that I'm not going to rave about--I'll let you check out the website for yourself instead.  Most importantly, it rarely crashes on me.  Even though I'm running Windows Vista.  Yeah, I know.  Impressive when a program works well with even Vista.
I will show you one nifty feature.  Open a new tab in Chrome, and this is what you get-- 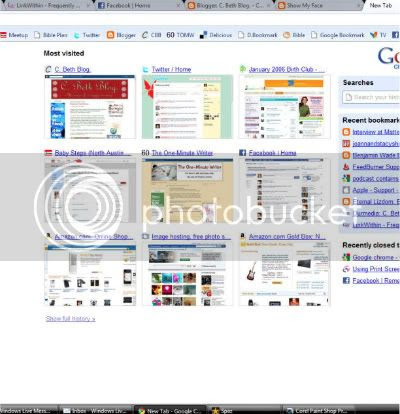 Those are my nine most frequently visited sites, ready to be clicked on.  Cool, huh? (Um, the fact that Amazon.com is one of those sites is probably not a good thing.)
Cate from Show My Face told me she loves Chrome so much, she'll be coming to me for all her tech advice from now on.  That will prove to be an extremely disappointing course of action for her, but it does make me feel very powerful.  (Cate said, "I have a computer science degree...but you own me.")
Check out Google Chrome here.
Posted at 5:00:00 AM

you're right about Google Chrome; it IS a very stable application.

we use several browsers, which one we use depends on the current activity.

the way we use Chrome is that we've tabbed several Google applications (Calendar, Gmail, iGoogle, Google Reader, et al) and use Chrome exclusively for those. (super fast since they are all Google-integrated).

anyhoo, thank you once more for sharing with us. :-)

Looks like I'll have to wait. Google isn't Mac compatible with it yet. Looks like I'll continue to use Safari & Firefox for the near future. I can't wait for the day that the world accepts Mac as the superior platform and moves to it. :) Mac lovers are devout Mac lovers.

Day 2 and still loving Chrome. Even when I opened about 30 new tabs out of my Google reader this morning, it performed like a champ.

Joe is unimpressed to hear me raving about it now since he pointed it out to me months ago. "Who is this Beth person and why do you listen to her but not your own husband?" I'm not even going to answer that.

I'm on the waiting list for 'Chrome for Linux' - Firefox has been crashing on me lately, too. And Google already owns most of my life one way or another....

bARE-eYED sUN--Yes, I do occasionally use other browsers too, since Chrome isn't compatible with everything yet. I'm glad you like using it too!

Angela--Oh, but with a Mac you deal with so many fewer ISSUES in general, so you don't even NEED Chrome. I'd love to have a Mac!

Call Me Cate--I have to say, one of my main goals as a blogger is to surpass my readers' spouses in importance. It sounds like I'm reaching that goal, and I am very proud.

Rachel--I wonder what happened with Firefox? It used to be such a great browser.

Beth,
Thanks for the suggestion. I was aware of Chrome but have never heard any first person comments from an actual user. I think I am going to try it out (Firefox user as well.)

Mac is beta testing it's newest release of Safari (our native browser) and it does the same exact thing lol.

Angela - you can get the Safari beta by going to apple.com. It doesn't come up on the auto update b/c it's still in beta testing. I've been using it for a couple weeks and have had no problems.

One more thing that the new Safari and Chrome share it that the tabs are in the header bar instead of creating an extra bar just above the page content.

For those of us with smaller screens, every pixel counts!

For me, that's cooler than the popular page preview thing.