Every day Amazon has a special Gold Box deal--a bargain good all day or until it sells out. Yesterday the deal was for YummyEarth Organic Lollipops. 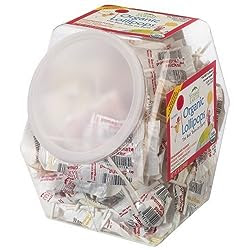 But then I saw that the "Comment" thread (available for all Gold Box deals) was, as of mid-afternoon, well over 100 comments. Most products draw under 30 comments, so my curiosity was, naturally, roused.

Well, it turns out lollipops bring out the crazy in people. Here are examples of just some of the debates that raged yesterday. (I'll use initials in place of names.)

JPS: Allergen free...that's what I look for in my Halloween candy.

Give me a break! If some little doofus is going to choke on certain treats then he/she may as well celebrate the sheltered Halloween as provided by his or her mother. It isn't on me to provide your squaling brat with some "San Fransisco" style goodies just because you gave birth to a freak!

OA: Golly, J, what a grouch you are. These lollies look like a great bargain for folks who prefer not to feed their kids the toxic brew that's in too many Halloween treats nowadays. These days I would certainly not advise letting kids eat anything given to them by strangers though. Better to have a Halloween party with friends at home.

JPS: I'm a razor blade filled apples kind of guy myself, thank you very much.

You can have my "No" vote too, as you pass out your soy-based, organic, post-consumer content candy bars.

For crying out loud, what's so wrong with Snickers? Can't kids have normal candy anymore? Why push the freak -pops?

PM9: I have a child with severe, life threatening food allergies and I take HUGE offense to your insensitive, cruel, uneducated comments, JPS! SHAME ON YOU for insulting CHILDREN on amazon or anywhere else!!! What is wrong with you that you feel the need to bully kids on the internet? FYI, my child doesn't have a "sheltered" Halloween, he had a SAFE Halloween, and he DOES trick or treat like everyone else!

NE: I bought a whole bunch for the kids, I do not like to give them the bad stuff, like RED40 which is basically colour of fleas.. from the cactusses. (In case you wander where the red colour comes from) That's why red m&m's are not kosher.

MS: WHAT?!? Come on don't go spreading misconception about things you have no knowledge of. People please make sure to read up on info and don't blindly take some off the wall crazy post from here as the truth.
Just to clarify, New Era was talking about Cochineal. See snopes here:
http://www.snopes.com/food/ingredient/bugjuice.asp

Why do people cite Snopes as if it were a legitimate source of information?

It's a website run by a married couple in California. That's it. No research team, no independent verification of information. Just some guy in his underwear, typing away while his wife does Pilates in the other room.

MDM: That's absurd. Plus, it's definitely not true, that rumor was debunked by Snopes.

F: This crap is made in Mexico.

Never ever EVER buy candy unless it's made in the U.S.A., whether it claims to be organic or not. Lead is also "organic" and is found to be in most candy made outside of the United States, plus even friends of mine from Mexico laugh and say they would never believe anything from Mexico is actually "organic".

And here's where it got cool. Another reader called the company, told one of the owners what was going on, and he came on to the message board to defend his product. He gave information about their manufacturing, and their voluntary lead testing. He continued to comment throughout the day. He provided his phone number, which at least one commenter used to call him. In the end, I was both entertained and impressed, and I bought a five pound package.

If Amazon gets tired of the distraction caused by these debates, maybe they should offer less controversial products, like automatic weapons or knock-off pharmaceutical drugs. Lollipops are just a little too over the top.
Posted at 5:00:00 AM

Just reading what you typed out, I've never seen or heard such a big debate over candy in my life!

Unbelievable. You're right. Maybe if they were selling semi or fully automatic weapons there would have been less controversy. Why can't we all just get along?! ;-)

Some folks have way too much time on their hands that they can afford to spend time arguing over candy. Seriously people go play with your kids. Thank you for sharing this for a laugh.

Oh My Word!!! Thanks for making me chuckle today.

Wow, all over candy? And they missed the opportunity for a good choking debate? Slackers...

I'm not at all interested in buying lollipops, but I still found this post interesting. It shows me that I live in a pretty sheltered little blogging world where everyone is NICE to each other! And I LIKE it that way. :)

Sometimes I think, "is this America? Are these 'average' citizens???" Ha. Some people really do need jobs! Enjoy the 5lbs of candy:-)

Thx for the note and prayers! I'd love another 'picture perfect' delivery but I don't want to seem ungrateful to God for all that He has provided already...

If you want to buy all natural organic, buy it

If you dont, then dont

Organic candy?
Now I have heard everything. LOL
But if that is what you want to give out at Halloween that's fine by me.

you just made my day!!! as a big fan of constructive criticism I thought yesterday's posts were outrageous, hurtful, and made me wonder where our "anonymous comment" culture is headed. thanks for bringing me back to the real world and thanks to the nice commenters here for putting a pure smile back on my face!!! with warm regards - rob wunder - co-founder of YummyEarth - support@yummyearth.com

Wow! That's some pretty intense debating over a lollipop. Especially when the lollipops in question are, um, Yummy. My husband buys them for a treat sometimes, and we all have our favorite flavors. I guess it's just proof that anything can be turned into a debate.

I am endlessly entertained and horrified by comment threads like you have here. I watch a lot of YouTube and I tell you, I had to stop reading the comments there. People get into the most amazing throw-downs in those comment threads! This really is a funny one, though.

The debates are very entertaining! I especially enjoy the Snopes bit.

We LOVE these lollies. I discovered them a while back and ordered directly from the company. Wish I'd checked Amazon that day... we are almost out now. They have a great Vit C drop, too. I learned about the company before purchasing and was impressed with their story and practices.