Several months ago, a couple of my Twitter pals were talking (well, Tweeting) about a particular book. Turned out a few of us ladies were interested in reading the book, and we ended up deciding to start a book club. We called it Jazz Hands Book Club...JHBC for short.

Other ladies gradually joined the club. We've been reading a book every month(ish) and then using an online chat site to discuss it. It's really fun! (If you're interested in joining, let me know!)

One of the members brought up the idea of sending out some little Christmas goodies to the rest of the group. Well, one thing led to another, and we ended up all deciding to send gifts to each other. Christmas was too crazy, so we targeted Valentine's Day as the "ship by" date.

It's been so fun! I'm hoping to get the last of my gifts delivered to me today. (Please, Postal Service?) And now that the other six girls have received mine, I can finally blog about them!

I decided to make crocheted gifts. (I know, shocker!) Since it's a book club, I made bookmarks. I've been wanting to learn more crochet stitch patterns, and I even have a great book with 250 different stitch patterns in it. So I used five of the bookmarks to try out new patterns. The sixth bookmark was a little different. More on that in a minute.

Here are all six bookmarks: 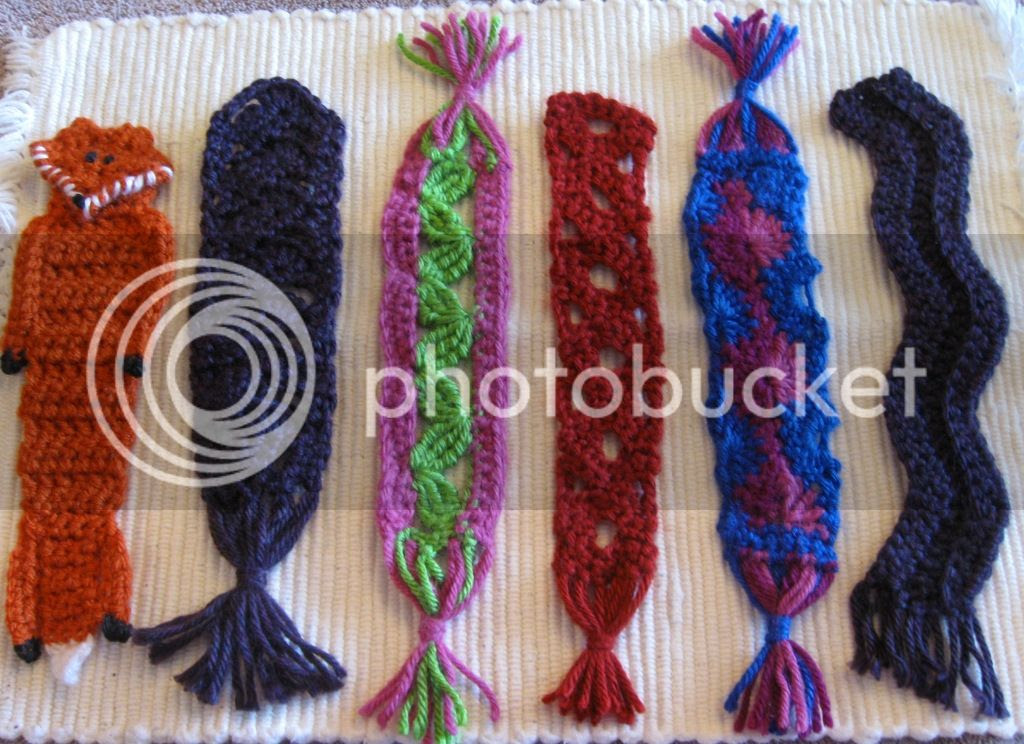 For Melinda's, I used the same yarn I used for a hat I made her last year, with a nice, open-weave pattern. 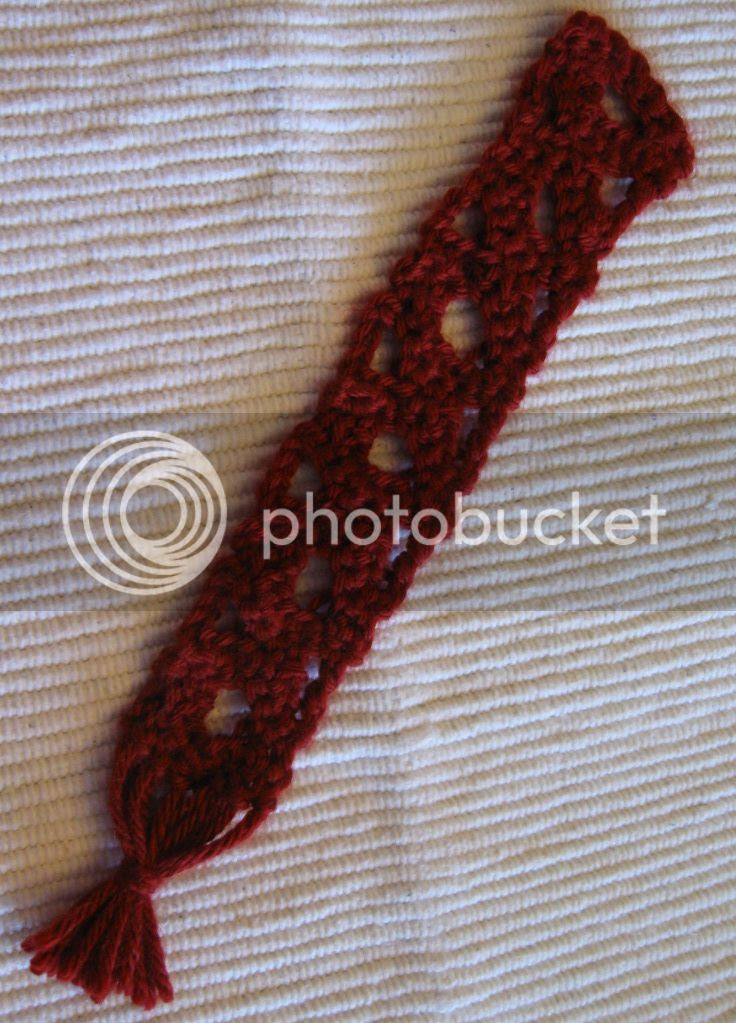 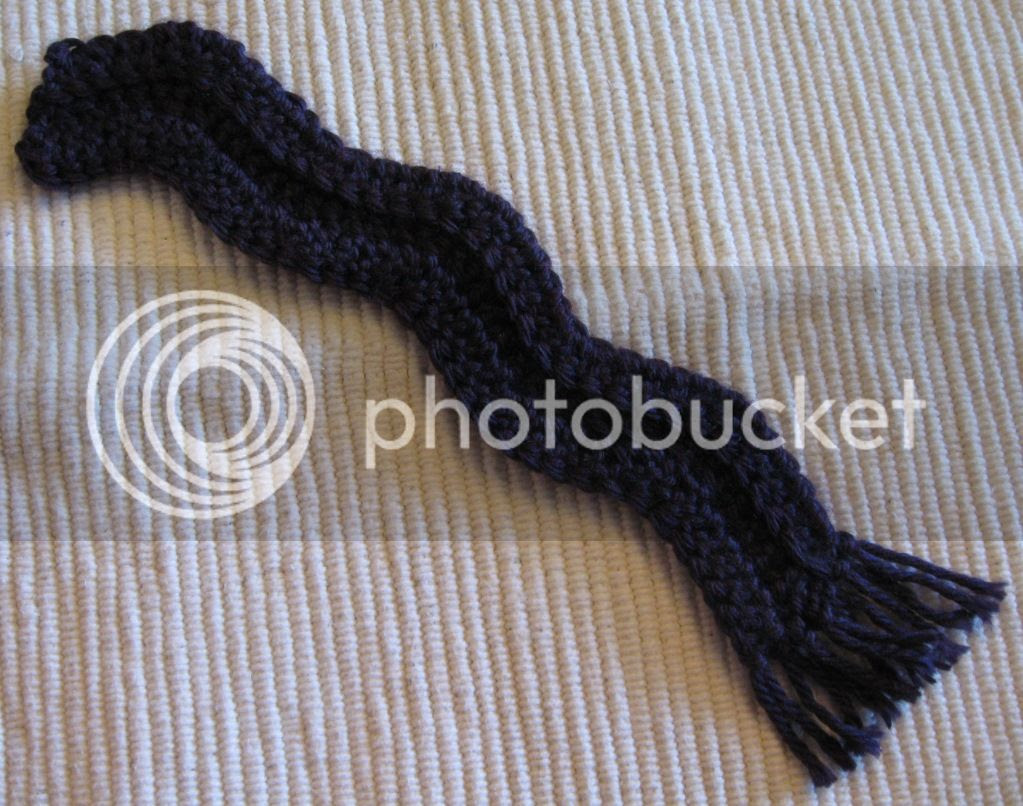 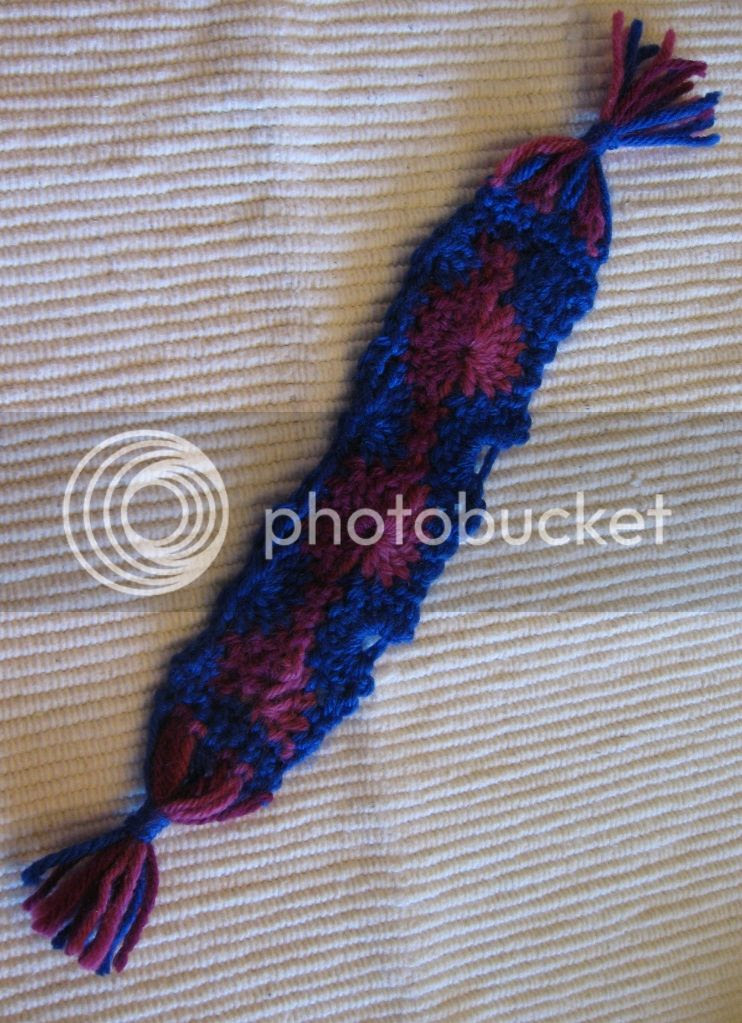 I really like this pink and green one with a leaf pattern. It went to Sam. 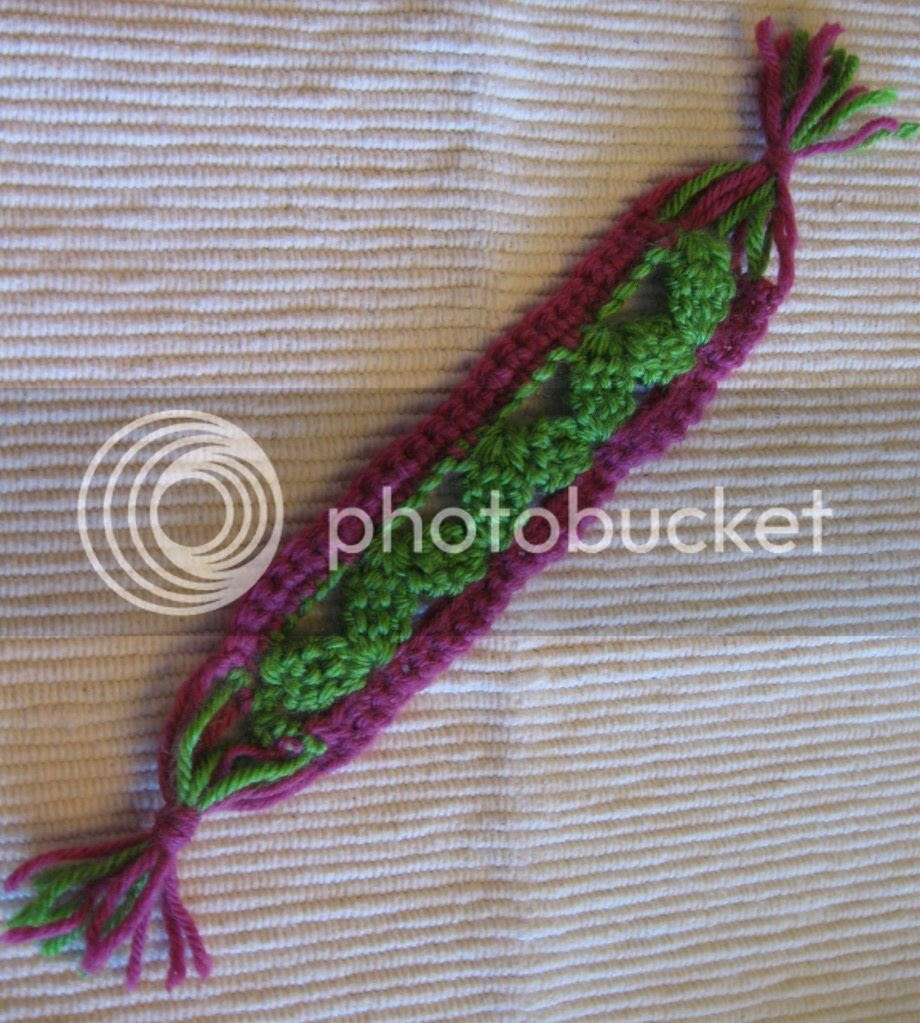 And it's kind of hard to see, but this dark purple one uses a nice variation of the commonly-crocheted "shell stitch." It was for Kerry. 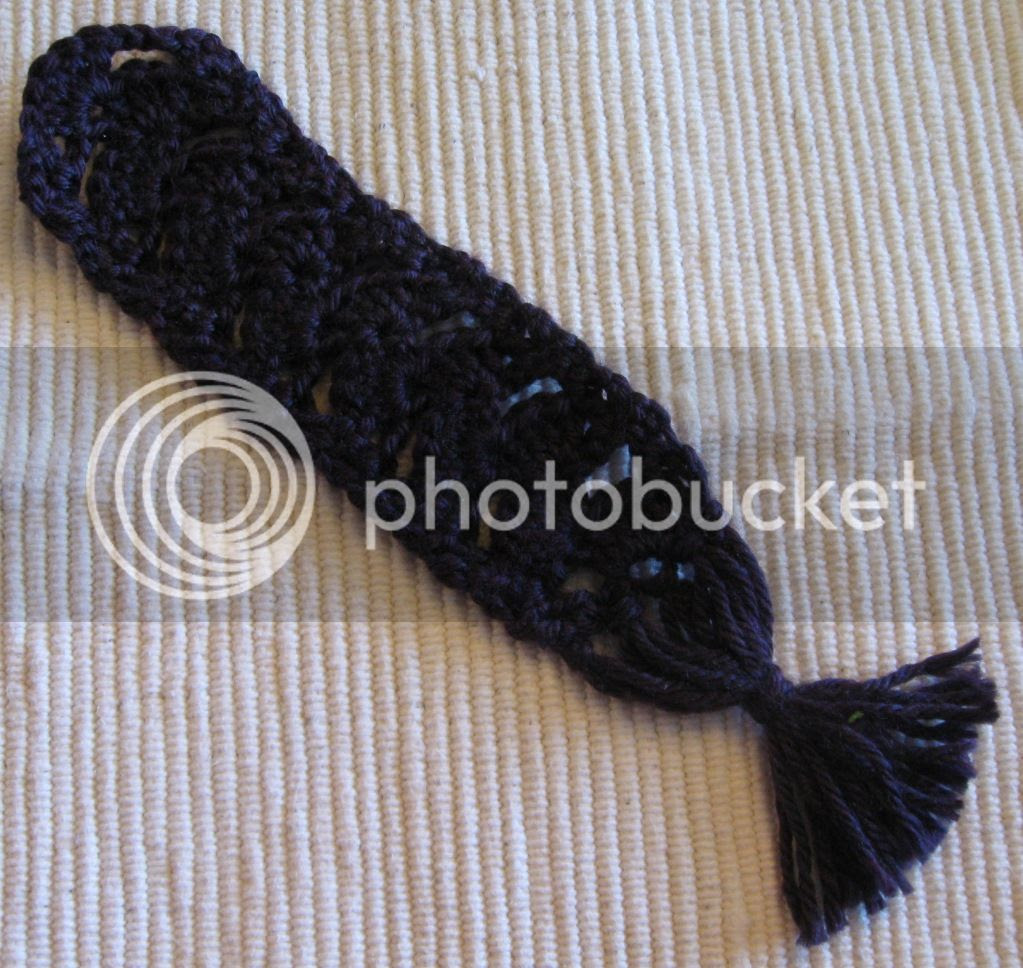 The last bookmark went to Annelie, who has a brand new blog! She is the one who ordered the fox scarf I made a few months back. (Check it out here.) Instead of trying out a new stitch pattern on her bookmark, I made it to match her scarf. I love how it turned out! 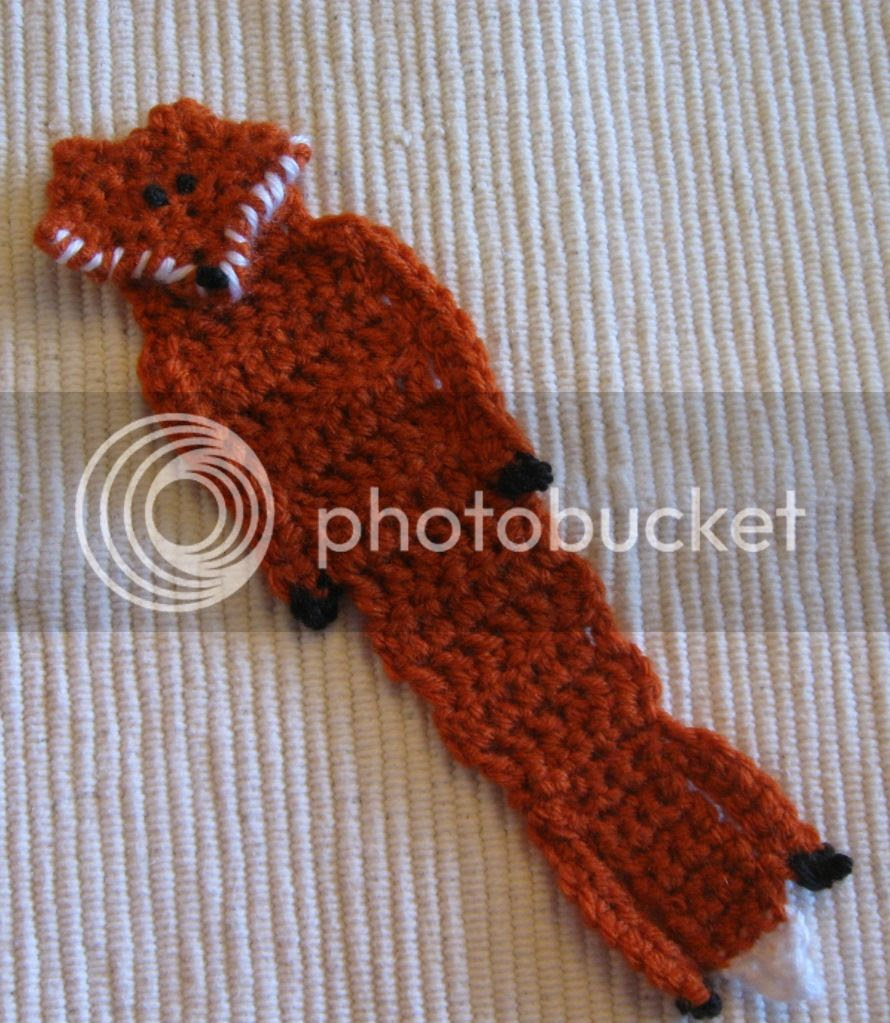 So that's it...my JHBC bookmarks! When the last of my packages arrive, I'll share pictures of what I received. The Bible says it's more blessed to give than to receive, but in this case, I gotta say...I've really enjoyed both!
Posted at 11:23:00 AM

I laughed so much when opening my gift and seeing this little guy! I love, love, LOVE my little Baby Fox bookmark! Such a brilliant idea to match it to my lovely scarf! Thank you!!!

This gift exchange has been so fun!
JHBC is the best!

I LOVE 'EM! You're always wanting an idea for us for Christmas or stocking. This would work great for me! I'll go ahead and put my order in -- just in case you decide to do it! I think I'd like it crocheted with white or colored thread so it's thinner.
These are adorable! -Mom

I love my bookmark so much! Thank you :-) You are so creative! They all look beautiful!

The fox is adorable! You're so talented, they are all gorgeous!

It is great that each bookmark has it's own personality! I love that my bookmark matches my hat! It is the best red ever. You did a great job with making a little fox for Annelie. It came out so cute!

Quite pleased with my bookmark, thank you! The colors are very me. Annelie's fox though... that's ridiculous. In a good way. You should totally consider adding a few of those to your shop.