I have loved my Kindle. (Ahem...both of them.) I reviewed it here.

And I'm not usually the type who "needs" to upgrade when I buy something and the "new and improved" version comes out.

But oh...be still my geeky heart...then I heard about the Kindle Fire. And the Kindle Touch.

And I'm going to have a hard time not asking Santa for a new Kindle.

Here's a quick run-down on the various Kindles now available, and the ones that will soon be available.

Amazon just repriced some of the current Kindles. The one I have (now called the Kindle Keyboard Wi-Fi) is now $99 (was $114) if you order the version with Special Offers. 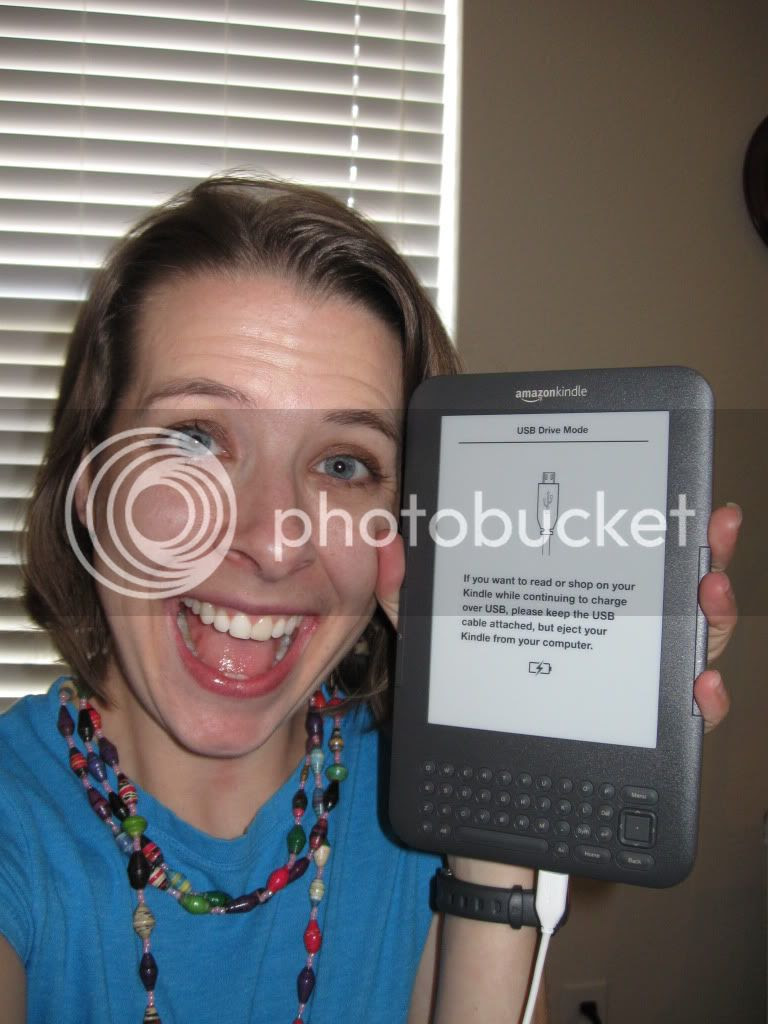 I have absolutely loved the Special Offers on my Kindle. (Check out my review for more info on the Special Offers and Sponsored Screensavers.) Don't tell Amazon, but I'd pay extra for the Special Offers. Lately the offers haven't been as good as they first were, but they still save me occasional money since I'm a frequent Amazon shopper. (For instance, I recently got some sunscreen for a great price with an offer for $10 off $25 of suncare.)

I suppose I should add that the Kindle DX (3G-only, larger screen) is still available. And it's still really expensive...$379.

For those who are budget-conscious (and who isn't?!), there's a new player in the Kindle game. It's more minimalist, and has a name that reflects that minimalism. It's just the plain Kindle (With Special Offers or Without Special Offers.) 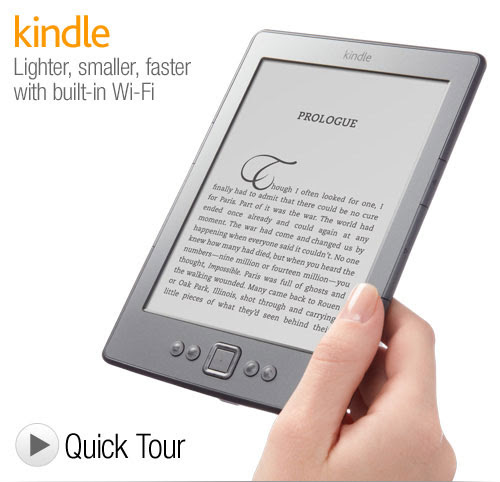 This Kindle doesn't have a keyboard. You can use the simple controls to select letters on an onscreen keyboard if you want to shop for books on the actual device, or take notes. But this review comment describes that process as "cumbersome." Still, at the awesome price of $79 with Special Offers or $109 without, this is a good option if all you want to do is read on the Kindle and don't care much about note-taking or actually shopping on the device. (I will say that while I really don't enjoy the process of typing on the keyboard on my Kindle, I'm glad I have it.)

In my original review, I said I'd like a touchscreen on the Kindle. And...it's coming! At a great price! 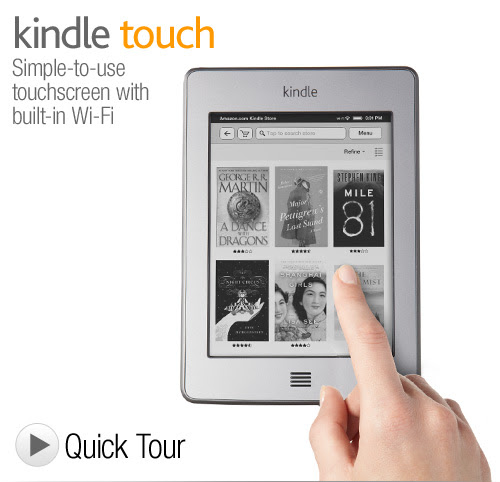 Some people won't want a touchscreen. Personally I think I'd much prefer it. While the page-turning buttons on my Kindle are great, I don't really like the other buttons on it (below the screen.)

A touchscreen wouldn't be enough for me to cough up more money though, when my current Kindle works just fine. If Amazon wants me to get another Kindle, they'll have to do better than that.

Oh, what's that? They have done better? Well, hello there, Kindle Fire. 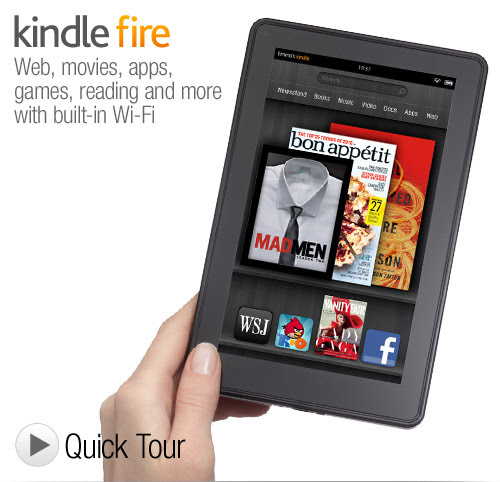 I've thought about getting a tablet, but iPads have been out of my comfort zone, price-wise. And there haven't been any other tablets that have really tempted me. But this one just may be the one that coaxes me into the tablet world. It's one of the smaller tablets, but it's certainly way bigger than my phone!

The Kindle Fire wouldn't totally replace my Android phone. I imagine I'd end up using my phone mostly for (gasp!) phone calls (and texts), and I'd use my phone apps when I don't want to carry around a tablet or when cell service is available but Wi-Fi isn't. The Amazon Fire is currently Wi-Fi only. Edited to add: Call Me Cate has pointed out in the Comments that the app store for the Fire will be locked down to only include apps that work well on it. So it remains to be seen how many of my phone apps will be available for the Fire.

So, there you have it, fellow geeks. Kindle's been doing a wonderful job at the forefront of the e-reader business, and it looks like they may hit a slam dunk as they enter the tablet business. (Wired says they "may be the best and kill the rest.")

Disclosure: I wasn't compensated in any way for this post, and won't be compensated if you buy these products.
Posted at 5:00:00 AM

I'm trying to figure out the new Kindles as well, mostly because my current Kindle doesn't have wifi and that would make borrowing from the library easier. I thought about getting the $79 version since it has wifi but it doesn't have 3g and that comes in handy as well...

If money wasn't a consideration, I'd probably get the version with the keyboard and the ads and the 3g. In the meantime, I'll see how feasible it is to just use the USB cable to borrow my library books.

The thing to keep in mind with the Kindle Fire is that they have really locked down the app store. A lot of apps that you can get for your phone won't be available for the Fire. This is good in a way - they're only going to allow apps that they know will work well on the device. I'm just not sure how much that will limit selection.

We have an iPad and we have an iPad competitor on the way (waiting for FedEx now) because Joe gets a hefty work discount. I honestly don't think they're worth the money for us. I use his iPad mostly to play solitaire in bed. We'll see if I feel the same way with the new one (it's Android so I have some hope).

I do not have a Kindle or any kind of pad (except those monthly visitor types). I've not had any interest in them, either. I was also a late-comer to the smart phone life and now I can't imagine going back to a basic phone.

Your post has me almost tempted enough to want one... hmmm...

I like to be able to buy my books used, at a discount price so I've never been interested in a Kindle.

Then, I got an iPod and downloaded the Kindle app . . . Now I have a bunch of books on my iPod. Some have been free and some have been discounted.

With the price of the Kindle suddenly SO reasonable I think I may start considering one . . . Christmas? Income Tax gifts to myself? We'll see.

Thanks for taking the time to lay it all out here.

When I first heard about the Fire on Monday I immediately wanted one. I mean, my husband who celebrated his 45th birthday on Tuesday wanted one ;)

Monday night I told him . . . I want to order this for you on Wednesday (because, well . . . I really kind of want an Android version of the iPad and I've been longing for a Kindle). My tech-savy husband said it probably wasn't what I (I mean, uh . . he) wanted, but it looked interesting.

We're still considering a purchase since I'm such an avid reader (I mean, because he's a computer geek and I'm *sure* he wants this new piece of technology).