As I write this, my kids are watching Beauty and the Beast. It was one of my favorites when I was a romantic teenager. (I was 14 when it was released in theaters.) So it makes me happy to see my kids enjoying a movie that I still love to sing along with. 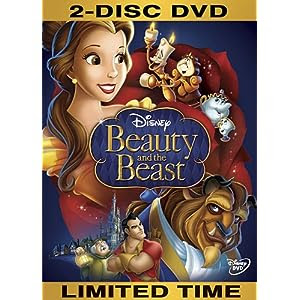 Image credit: Amazon
I love some of the messages of this movie.
But as I watch it as an adult, I start to analyze the story more than I did as a teenager. Here's what I see now:

Beauty and the Beast is about a girl whose father has been imprisoned (in a genuine dungeon) by a bitter, mean Beast. The sweet girl, who has her whole life ahead of her, then offers to take her father's place, and the Beast allows her to. She is taken captive (in a nice room with nice clothes--but captive nonetheless) by the Beast. Then as she stays there longer, she starts to fall in love with her captor. When he finally releases her, she defends him and returns to him.

Fourteen-year-old Beth saw an incredibly romantic heroine who sings beautiful music as she begins her happily-ever-after.

I guess there is a small chance I'm overthinking this Disney film. I suppose that's within the realm of possibility.

But don't worry, it's nothing that a little more singing (at the top of my lungs) won't cure.

Ahem. (Sing with me now.) "Tale as old as time...song as old as rhyme...Beauty and the Beeeeeeeast."

Ahh...that's much better. Beauty and the Beast is just a sweet, romantic fairy tale.

There are a lot of unpleasant messages in Disney films if you really think about them (not just singling out Disney though - it's true of a lot of cartoons and movies and even toys). A lot of women being saved by men, a lot of women valued largely for their looks. Not to mention a lot of women cooking and cleaning.

But Belle was one of my favorite Disney girls as well, largely because she was brunette (yay for brunettes!) and a bookworm. You're right that her relationship with her father was really lovely - I had forgotten that.

Of all the Disney movies I grew up with, Beauty and the Beast is at the top of my list for movies I'd like to watch again. Followed by The Little Mermaid because I just loved her sense of curiosity.

Maybe I just enjoy those things that remind me of the 14-yr-old I once was, before life got so complicated.

And now I'm going to have Disney songs in my head all day. Not that there's anything wrong with that!

I like Disney's whitewash of a lot of these stories. The real Hunchback of Notre Dame? Not all that kid-friendly. Fox & the Hound? Don't get too attached to Fox. Same with Jungle Book and a host of others. :-)

But I agree, there are a lot of interesting subtexts in movies and stories. Twilight? Now THAT girl has issues.

On a recent podcast, we had the kids special guest with us and we talked Disney movies. Teagan surprised me with her reason for liking Beauty and the beast.

Listen around 31 minutes. Her reason for liking Beauty and the Beast is because Beast becomes nice at the end (she focuses a lot on "turning it around" and making different choices).

She gives great insight on Toy Story, too. (listen around 35 minutes) Simple sentences but big meanings from a 6 year old.

Most of the Disney films are old stories that have been around forever. Disney tends to focus on the pretty, happy, and lighthearted, but with a dose of what life can be like....bad things happen.

The original stories are even darker than the films! Have you ever read the original Brothers Grimm? Can be terrifying for a child. They have been toned down over time, but I think the fairy tales were meant as morality tales for children to scare them into behaving.

Still, they have stayed with us forever and usually have a happy ending. They are classics. At least Disney adds some humor.

Beauty and the Beast has always been my favorite fairy tale. I may, however, be the only grandmother on the planet who has never seen the Disney film! Somehow my recollection of the story just doesn't include dancing dishes! :)

I agree with you about the Stockholm Syndrome. Thankfully the target audience isn't going to notice that little detail at their age.

It is really common for cartoon movies to have some questionable situations that wouldn't fly in reality. However, there wouldn't be much show if it was all happiness, rainbows and mentally healthy characters.

Beth just thought that it was funny that a friend posted a post about kids films today and wanted to share it with you (had to laugh it is funny!)and somewhat true also that's the scary part

How do you expect kids to listen to their parents when Tarzan lives half naked, Cinderella comes home at midnight, Pinocchio lies all the time, Aladdin is the king of thieves, Batman drives at 200 mph, Sleeping Beauty is lazy, and Snow White lives with 7 guys. We shouldn't be surprised when kids misbehave, they get it from their story books.