One of the frustrating things about motherhood is that very small children can make it hard to do tasks that were a piece of cake when I was childless. Take folding laundry, for instance. In my pre-child days I didn't like doing it; I procrastinated terribly; but once I got around to it, it was easy.
Until I had a child who was big enough to grab the laundry off the coffee table or couch and undo everything I'd just done.
For many months, folding laundry was a source of unending frustration for me. Then Chickie got to the point that she mostly ignored what I was doing, and thankfully Zoodle has never been that interested in Daddy's freshly-folded T-shirts, so this boring task became manageable again.
And now...this is really cool, folks...Chickie, who used to hinder me in my laundry-folding efforts, has become a helper. Last week as I was trying to get through a full basket of clean laundry, Chickie was eager to assist. And it became a little game--I'd fold something, give it to her, and she'd figure out what pile it went in, whether it was one of her shirts, in the nearby pile... 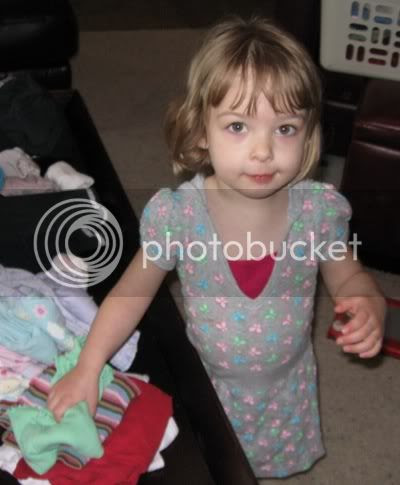 ...or a pair of Daddy's socks, which belonged on the far side of the table. 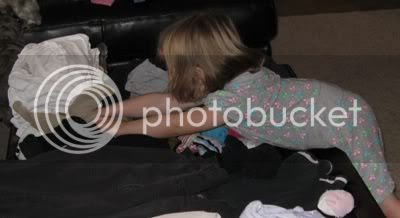 Involving Chickie in my chores is something I haven't generally wanted to do in the past, since her "helping" tended to make tasks take longer. Finally, though, she is at an age when sometimes she genuinely helps--no quotation marks required. (She's gotten good at sorting utensils when I'm unloading the dishwasher, too.)
These bits of independence are so encouraging to me. I imagine in just a few more years, if I can keep the school district from finding out I have a kindergarten-aged child, I'll be able to put her to work full time doing cooking, cleaning, and childcare. It's about time I get down to the serious business of eating bon bons and watching soaps all day.
Posted at 5:00:00 AM

Paige folds washcloths & hand towels. I end up refolding some behind her, but they do keep her busy. I'll have to try having her help put the folded stuff in piles. Thanks for the good idea.

Chickie is adorable! What a great helper!

Haha, I was just having the "soaps and bonbons" discussion with a friend last night. It's great that Chickie can help and probably fantastic for her to be involved. Now she just needs to grow taller and stronger so she can reach higher and lift things for you!

Such a cute little helper! I've had my daughter "help" me refold a batch of laundry that I just finished. It takes twice as long but we do have some laughs together :)

I give Christopher his own pile, a few t-shirts, some hand towels...etc... and it keeps him busy while i do my own thing.

Abby's an avid folder, so I hand over anything that doesn't need perfection - towels, washcloths, undershirts, underwear - and she has a blast! She also loves to dust and Swiffer. I take advantage of it now, since i know in a few years she won't be so eager to help!

Diva also loves to help. She puts away silverware from the dishwasher (minus the knives), and loves to help put away groceries. She also helps put laundry away.

As frustrating as it is, it's great to let them help out. Trust me, once they get older it will be like pulling teeth to get them to help out! Gunny pretty much has no interest in helping me with anything although he does like laundry day because he feeds the "sock mice" to the kitties. They love to pack around his socks in their mouths and then I have to play hide-n-seek to make matching pairs. You just can't win in my house!

I say that if by the time your kids are about 6 you haven't gotten your "promotion", you're not doing it right. Good for you for taking the time to let Chickie help you & learn how to do these things.
Isn't it so much fun to watch our children grow up?

The last line cracked me up. Ellie is only one but she has mastered the unfolding part!

Maybe we can get our kids to babysit each other while we go out for lunch or movies!!!

Fabulous!! I love that they can help around the house - and I am soo with you on the child labor thing! HA!

Glad the laundry is finally getting done at your house. Are you guys for hire?