I am so excited!

I've decided what I want for Christmas.

Some time ago, I blogged about how I kind of wish my old mixer would break so that I could buy a Kitchen Aid.

Well, I'm tired of waiting. Sunbeam doesn't make the fanciest mixers in the world, but boy do they last. And last. And last. Far longer than I want them to. (In January we're celebrating our 10th wedding anniversary...and the Sunbeam's 10th birthday!) So come Christmas, I'll be retiring the old mixer.

But I've decided against the Kitchen Aid. Turns out there's a mixer that some people like even more. So in about a month, I will be welcoming this beauty into my home: 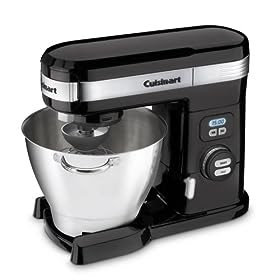 It's a Cuisinart. Isn't it pretty? One of the big benefits of the Cuisinart is that it has a three-year warranty (five years for the motor!) Kitchen Aids only have one year warranties. (One!)

Hopefully this beautiful mixer will still be going strong when The Engineer and I celebrate our 20th anniversary!
Posted at 5:00:00 AM

If I bought my missus something like this for Christmas I would soon find it wrapped around my head. :)

I have a friend who bought his wife a vacuum cleaner for an anniversary present. He's currently available if you have any friends who would appreciate such sensitivity in a man.

I'd LOVE if my husband bought me a stand mixer for Christmas! All I've had is a hand mixer for the last 15 years.

The Cuisinart IS beautiful, I agree!

Yippee! One day I hope to upgrade from hand mixer to stand mixer.

And congrats on the big anniversary. :)

Oh, I should mention my parents still have their Sunbeam mixer, 34 years later. The bowl broke in the 80s, but the mixer still works!

For quite sometime I have been absent from the blogosphere. But now I am back. And even I am excited, though the reason for my excitement is totally different than yours. Would love if you spare sometime and visit my new blog - Joys Of Motherhood!

I don't even have a mixer. It would just be a waste of cabinet space at my house. LOL

I've asked for a new dresser for Christmas. This is how I know that we're getting old, Beth. :)

That is gorgeous! I'd love to have a stand mixer too.

I received my Kitchen Aid from my husband about 15 yrs ago for my birthday. Its the pro. I love it! Never had a problem with it, and I do ALOT of baking:)

I am sure that Cusinart will be a fabulous toy as well, have fun!

She is beautiful!!!! Wow. I do love my Kitchen Aid but if it ever poops out - I'd definitely consider that!!!

Isn't it funny how a long time ago people used to make items to last? So if you got something for your wedding, you could use it for your whole marriage?

Don't get me wrong, I'm excited for you and your new baby. :) I just find it so sad that these days we just have to assume that the stuff we buy is going to need to be replaced.

Ok, getting off the soapbox now. Have an extraordinary day, all!

The Cuisinart is nice , but as for me and my Kitchen Aid I would never trade. I have had my Kitchen Aid for 23 years. I have used it for mixing things up but I also have all of the extra attachments. I have used it to help make applesauce, sour kraut, jams and jellies, shredded cheese by the almost ton. Nope if and when the Kitchen aid goes I will replace it with another.
But I am glad that you are getting an upgrade from a hand held.