Today I went back to the allergist. I saw a different PA than I'd seen before. We discussed my blood test results.

Great news--there is nothing in my bloodwork indicating an autoimmune disorder or any other disorder! The one thing that was really high was my IgE level. You can read more about IgE here. High IgE indicates an allergic response to something. And mine was really high (normal is 290 or less; mine was 1399. The test was done 8 days after my hives started, when the hives had mostly gone away.)

A week ago, I had almost weaned off my antihistamines, when I again got hives. They were mild, but I had to go back on my meds. I am again in the process of weaning off those medications so that I can get my skin testing done for both food and environmental allergies. If the hives return, we have a couple of other medication options we can try that won't interfere with skin testing.

I did find one thing in common that I consumed before I first got hives, and before they returned last week. Both times, I'd had licorice root. Weird, huh? The first time, I'd had an herbal tea (Tazo Cocoa Mint Mate) with licorice root in it; the second time I'd had some fancy root beer with licorice extract in it. The allergist told me they can do a skin test for licorice extract if I bring it in with me. (Unsurprisingly, it's not on their "top 100" list of foods they are prepared to test for!) I just ordered some on Amazon, and I'm definitely curious to see if I react to it.
Posted at 6:02:00 PM 93 comments: Links to this post

Email ThisBlogThis!Share to TwitterShare to FacebookShare to Pinterest
Labels: allergies

It starts with me: Law enforcement and Black Lives Matter

What a tough time we're in as a nation. On Facebook, I've posted stuff lately on Black Lives Matter. I've reposted inspiring photos and video about the support my local police, and Dallas police, have received. Any one post...or any five posts...can be polarizing. Now, my own words, summing up where I am:

Many law enforcement officers and families speak out about how frightening it is when they or their loved one puts on a badge and heads out of the house. Law enforcement officers and families, I BELIEVE YOU. You risk yourself for us--for me! I SUPPORT YOU. When I haven't been vocal enough about this, I'm sorry. You put up with a lot of crap on the streets, and I want to combat that by supporting you publicly and privately.

I think the vast majority of law enforcement officers want to protect every innocent person in their jurisdiction, and want to get criminals apprehended as safely as possible. I wouldn't have the fortitude to make the split-second decisions they make--and I'm glad they have that fortitude.

Regarding the black community and Black Lives Matter advocates:

Many black people speak out about how frightening it is to get pulled over by law enforcement, how degrading it is to be followed around by store security, and more. Members of the black community, I BELIEVE YOU. We're a country that has been broken by racism for generations, and it doesn't go away just because most of us want it to. I SUPPORT YOU. When I haven't been vocal enough about this (which has been most of my life), I'm sorry. You put up with discrimination that I'm often totally unaware of, and I want to combat that by supporting you publicly and privately.

I think that the vast majority of Black Lives Matter protesters want to protest in a way that is meaningful, peaceful, and affects change.

How does this all fit together? 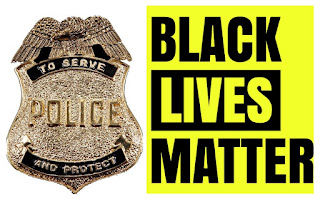 I believe only a tiny minority of Americans are so racist as to purposefully target people of color. But I also believe that nearly all of us (myself included, without doubt) hold stereotypes that have been honed over generations. Many of these stereotypes are subconscious, but still affect our actions.

Whether we're children's pastors (yep...that's me) or store clerks or servers or lawyers or electricians or construction workers or nurses or teachers or doctors, or yes, law enforcement officers--whatever the color of our skin is, chances are, we aren't treating everyone equally, despite (in most cases) our very good intentions! So if we're going to work on these problems--this antagonism towards police, this racial discrimination--we have to do it by stepping down from pedestals. This isn't a problem with "them" (whoever "them" is)--it's a problem with us.

I support law enforcement. Sometimes individuals in that community get it wrong. Sometimes we all do.

I support Black Lives Matter. Sometimes individuals in that movement get it wrong. Sometimes we all do.

After my last post, I woke up the next day (Tuesday July 5) feeling so much better. The day after that (Wednesday July 6), I felt back to 100%...just in time to return to work!

From the start of my hives and anaphylactic symptoms, to a full return of energy, was 13 days. If this happens again, at least I will have prior experience to temper my expectations!

The itchy hives have not returned, and the discolored spots on my legs are fading significanatly, which is all great news. Starting tomorrow, I will stop taking Pepcid. If the hives do not return in two to three days, I will reduce my Zyrtec to once a day, and a few days later, I'll stop taking it altogether. If all that goes well (no return of hives), I can have skin testing for food allergies a week after ending the Zyrtec. Hooray!

Some of my blood tests have come back. The PA and I discussed this only briefly on the phone, so I don't even know which ones have come back yet--but they were all normal or close enough to normal. This is somewhat frustrating--I want answers! But considering that one of the main points of the blood tests was to discern if I have an autoimmune disorder--the more I think about this, the more I am so glad the tests have been normal so far.

I am at the end of a slight head cold or something, but it never got bad, and it seems to be nearly gone. That's encouraging from an immune standpoint; my body is fighting the cold really effectively. Also, three days ago I got several ant bites and a bunch of chigger bites. The itching is NOT fun, but it's great that all these bites have not led to any systemic allergic reaction.

I'm wondering more and more if the events of two weeks ago were some freak, one-time thing. (Or it could be some sort of reaction that will repeat but not often--the last time I had unexplained hives was over 13 years ago.) Then again--it could happen again tomorrow (which would be really bad timing, so I'm praying it doesn't!) With that in mind, we'll continue to look for answers; I'd really like to know if I can do something to prevent future reactions.

This hasn't just been a physical journey; it's been emotional and spiritual as well. Listening to this message from my pastor was a turning point for me. God knows what's going on with me--even when I don't. If you're feeling fear about anything and are open to a God-based answer to that fear, you might take half an hour to listen to the message. It's a good one.
Posted at 9:29:00 PM 13 comments: Links to this post